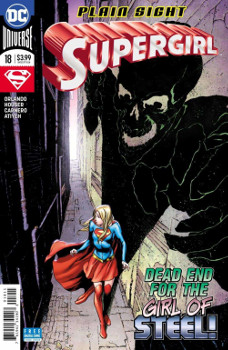 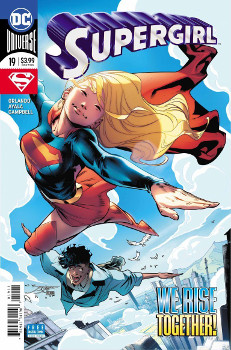 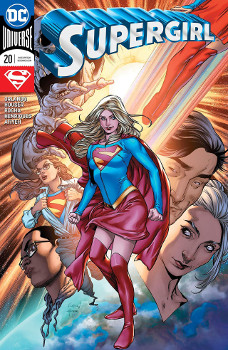 I want Carnero to stay on this book. The revolving artists recently have drained the quality and continuity of this book. And Carnero’s art is refreshing because they understand what a teenager looks like. (Julio Ferreira from the last issue was pretty good too.)

Oh, Dr. Shay Veritas, I want you to be okay. I kind of want this book to turn into Kara raised by her two moms, Shay and Chase. Not that I think it’s going there in any way. There can be three moms if we want to keep Eliza alive.

Since I know nothing about Mokkari, I guess I better have other investments. There are questions about why Bones would be working with him, but also how much do I care?

Speaking of not caring, yeah, the Evolutionist seemed a little blah. Especially when she realized she was being tricked and just left Earth. You’d think with all those superpowers, she could’ve cleaned up a bit of her damage.

Ben and Kara are cute. But did they have sex on the beach? It seems really inconvenient that Kara’s hair turns back to blonde from her brunette disguise when she falls asleep. Good thing she wakes up before Ben.

First, I loved Campbell’s art. The softness was so beautiful, especially in the softness and goodness of this story. Everyone’s expressions were big, and everyone looked like a high schooler. Campbell did a great job at dressing Lee, and no one will be surprised that I want all of their clothing. While I’m still unsure how some of Supergirl’s world works, the cleaned up art-style fit so well with what I think I know about it.

In the ongoing plot sense, this issue was mostly a standalone story. Though I did genuinely enjoy the part where Chase threatens Bones, and then he tells her he knows exactly what’s going on. Chase will be rescuing her girlfriend asap.

Lee is a lovely character to get to know, and I hope they aren’t a one-and-done character. Superhero comic books always benefit from a cast of characters to bring humanity to the hero. Here that’s what we see from Supergirl and her interactions with Lee. I adored the moment when she wrapped her cape about them.

It was kind of weird to see Supergirl as Kara spying on Lee’s interactions and coming out to their parents. I don’t know why at this moment we needed to experience the scene from Kara’s point-of-view when we’d already established a relationship with Lee.

And there were some moments where Kara compared her life as an alien on Earth to Lee’s own feelings of alienation and difference that were a little too corny and Kara border-lined on centering Lee’s emotions on herself, not on them.

But overall, this was a sweet issue, and I’d love for Campbell to stay on this book. Same with Ayala as co-writer.

Rocha’s art is pretty awful, especially in contrast with the last issue, which I loved the art. That final page with Supergirl flying away, what is that look on her face? She appears to be drugged, and someone is forcing her to smile. This should be the look of joy of having her major problems solved and not being public enemy number one anymore.

And Turid Goldenaxe looked like a throwback to the era of big titties superhero books. Rocha’s art is so weirdly inconsistent that I just do not get it. I also don’t understand why Rocha’s on so many major titles and getting a ton of praise. Yes, there are other famous comic book artists whose art styles I do not like, but most of them are consistent in style and in what about their art I do not like.

The plot lacks. I did like the revel that Supergirl can touch Bones’ cyanid hands without dying and she hid that from him. And I appreciate the Ben and Kara ongoing romance. I would also read an entire series about the adventures of Chase and Lar-On with help from Dr. Veritas.

The rest of it, however, was a mess as we transition to the next major story-arc.