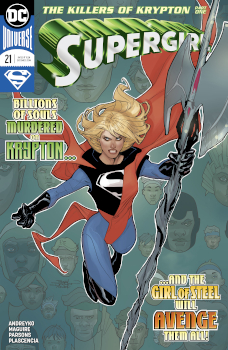 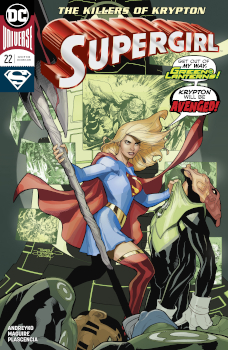 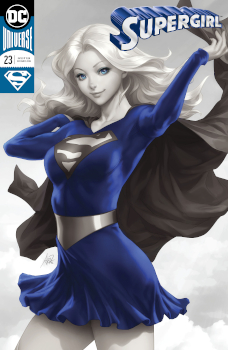 The last Andreyko book I read, I did not like. This one is not boding well for a start, and honestly, I may have canceled the book sooner if I’d realized Andreyko was writing Supergirl. (The issue of being so incredibly behind in my reading is missing things like this, or not stopping buying a book soon enough if I’m not enjoying it still.) Though I may blame the terrible plot on Brian Michael Bendis, for the moment.

The thing is, one of the most interesting things about Superman and the Kryptonians is that a climate emergency destroyed their planet. It ripped it apart. This foundational tale gives Kryptonians a humbling point when dealing with Earth. They may have advanced technology and superpowers, but they aren’t any better. Having a villain (or a secret cabal of villains) be the one who truly destroyed the planet, then that’s not as interesting.

One thing I did like about the book was Maguire’s pencils. Kara looks powerful, young, and in distress. The flow of Maguire’s layouts is also beautifully done. I suppose, if the story isn’t great, at least I’ll have some decent art to look at.

Kara’s blackout cape and Krypto were my favorite things here. I can see why maybe you wouldn’t bring your dog while breaking and entering; however, a super dog might come in handy. Or at least elicit you some sympathy, when it looks like the Green Lanterns are pretty pissed at her.

It seems like this ax is problem causing. Maybe it’s even a lying ax. It’s definitely leading Kara directly into trouble.

I wanted Krypto to chase the squirrel Green Lantern.

The last page was ridiculously ominous.

I take back what I said about liking Supergirl’s heist costume. The little drop-front piece covering up her camel toe in the opening page swings back like a sizeable menstrual pad: nope. This is awful. That’s not even considering that look on Kara’s face, which kind of says, I just realized I got my period, and now there’s a big spot on my pants I’m trying to cover up.

This issue is a mess story-wise. It assumes knowledge about Green Lanterns and this world. Supergirl’s getting played, but who is playing her? The Circle? The Lanterns? The dead hologram?

I feel rather inadequate to keep reviewing these issues, and this will be my last review of this Supergirl run. I do have about ten more issues in my to-read pile, but besides this book needing a firm editing hand, there’s not much else I can say.