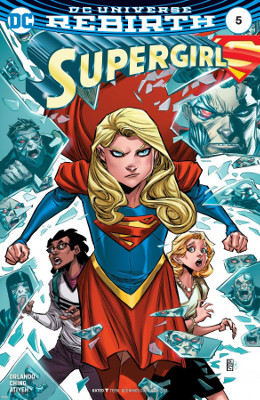 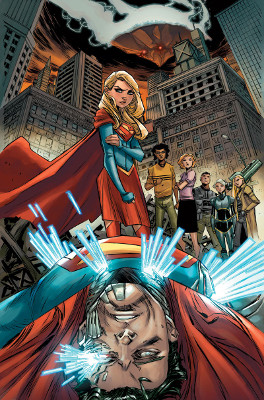 I’m rather upset that there is no cat in this, despite this alternative cover I bought because it was adorable. Also, where is Streaky the Supercat?

Cat Grant remains the very best character in the universe. I want a story about Cat’s life and her rise to media empiredom. I want to see her fretting with Lois Lane. I want more of her.

I like Supergirl appealing to her not-mother’s sense of motherhood. And how she does protect Eliza. How even if previously, Kara did not seem like she liked her adopted parents at all, it’s nice to see her coming around. Or at least, Kara realizing that she’s on Earth, her family’s gone, and she does have people who care about her. I’d like to learn more about the Danvers, why Kara is with them (beyond Chase and the DEO), and what their motivation is. On the Supergirl show, it’s very different because the parents aren’t DEO agents when they take Kara in, and how they hide her from everyone, including the DEO.

Alura talking about how she and Zor-el heard Kara being upset about being on Earth was heartbreaking. Definitely some of Orlando’s best work in this book to date to really bring around who Kara is and how she’s truly adjusting.

Kara’s gotta feel a little good at rescuing Ben and having him fawn over Supergirl.

It’s nice to see Kara fully accept that cyborg Zor-el is not her father. That who she remembers is long gone and now the Danvers care for her. The scene where she stops the glass from hurting all the humans was a bit melodramatic, but effective.

I want more of Chase being a boss. Orlando’s always great with Cat, but we also need boss Chase.

I do hope Kandor heading to Earth doesn’t turn out like Asgard in Oklahoma for Marvel.

Well, I know nothing about Dr. Shay Veritas. But it seems like she’s going to be adding layers to this story. Instead of Director Bones. Or in addition to?

My favorite part of this arc has been Ching’s art. He did a fabulous job at showing the standoff between Kara and cyborg Zor-el. You can see how much Kara wants Zor-el to be the real one, to really be her father. But her depressing realization that he’s not.

I wasn’t so sure about Ben, but now I’m glad he’s there. Orlando sets them up for a different kind of relationship than a direct competition. Though if Kara missing a morning made Cat that upset, I don’t know how longer Kara’s going to last. Of course, maybe Cat doesn’t micromanage her Young Innovators lab.

Kara making her adoptive parents dinner was cute and a nice wrap up.