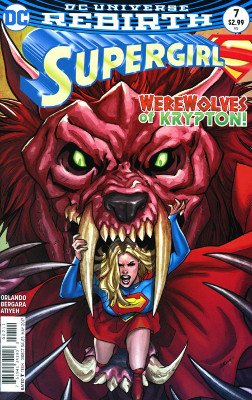 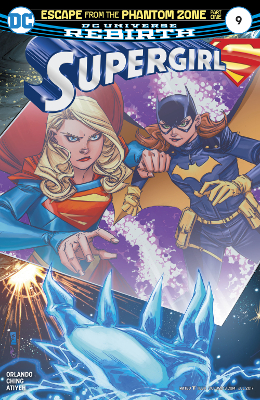 I don’t know why DC comics always make me feel like I need to run to Wikipedia, but I don’t know anything about Dr. Veritas and I feel like I should. From this little snippet of conversation with Kara, she’s been in imprisoned for something.

But apparently, Kara’s current mission is to rehab everyone with friendship. Perhaps she’s trying to make up for her cyborg parents.

I did like the story of Lar-On. It was a nice critique of Kryptonian culture without being too focused on the El family. Lar-On actually seemed more like a normal Kryptonian compared to the backstories of most others I’ve run into in my Superman universe forays.

The moon being psychological was a nice twist. Same with Kara showing Lar-On as a child that it’s okay to dream.

I do miss Ching’s art. Bergara’s seems to mimic his style, but it’s not quite as sharp. Supergirl’s skirt also seems to be just a hair too short in a lot of scenes.

I do rather enjoy Kara and Kal-El hanging out together. Talking about how their life is. This helps gets some exposition about Kara’s life out of the way, and about whatever is happening in the greater DCU about Kal-El. As someone who has never regularly read a Superman comic, I like having some backstory to help make sense.

It felt nice that Kara wanted to talk in Kryoptian. Even though I’m sure Babs and her spying was able to translate all of it. I adore that Kara and her stepparents have a list of Earth food that Kara needs to try.

I’m not sure how I feel about Kara saying that she may have feelings for Ben, the same way that Lois fell for Clark as they worked together.

Yeah, Babs is definitely going to put a hook into CatCo’s plans.

I’m a big fan of Ching being back on the art. I hope this is permanent. He does a great job at drawing the Phantom Zone. And making it fit nicely into the tone of Supergirl.

While I didn’t read the Batgirl annual, I’m glad that takeaway is that Kara knows Babs is Batgirl. It’s nice to have no guessing. Even if Ben has no clue. Such mystery. Kara’s and Babs’ jabs at each other were great.

Though they are definitely going to have to become better friends in order to escape the Phantom Zone.

Chase being a total badass for two seconds here reminds me that we need more Chase in this book.

Xa-Du — how do you even pronounce this fellow’s name?