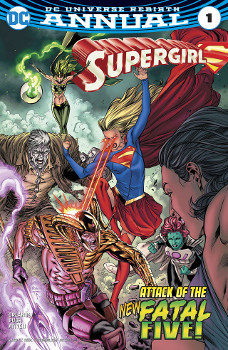 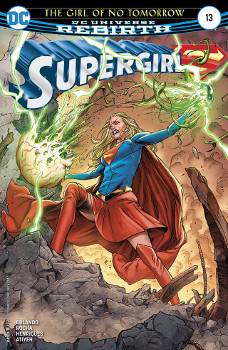 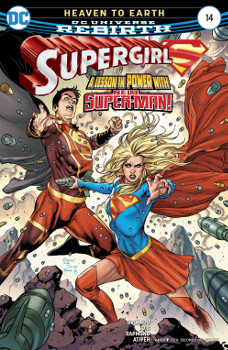 The writer, artist, and letterer are all men named Steve. The colorist is Michael. From what I can tell, the only woman involved in creating this book is Jessica Chen, the associate editor. Who, by the way, was working under none other than known sexual harasser and Superman & Wonder Woman group editor, Eddie Berganza (fired now thankfully).

The Fatal Five seem to just be pawns of the Emerald Empress. Which means her pawns don’t mean much, and at least a few are taken out easily (Grundy) or at least backburnered. We get some of her backstory, but it is not endearing.

Mostly, her future seeing eye seems to be gasligthing her. If her father will die due to Supergirl and Emerald Empress battling, then why doesn’t she just stay far, far away from Supergirl. This makes way more sense, instead of making what she saw in the eye come true.

I need more of Dr. Veritas and Chase. Yes, we need much more of them in this book. I wouldn’t mind more time with Eliza and Jeremiah. And you know, Supergirl doesn’t always have to be in a big battle.

I suppose it made sense to separate Supergirl from the D.E.O. Even though we were just getting to know how everything in her world worked. I do find it slightly unbelievable that there aren’t copies of Kara’s adoption file somewhere else, or that the Danvers, Chase, and Dr. Veritas are the only ones who know Supergirl’s secret identity.

The changing artists tire me. From what I’ve seen in other reviews, I’m on the minority viewpoint here. But these past several artists seem like the current superhero-style without distinct flavor of their own. (Which can be editorial direction.)

Destroying the eyeball was the right move. It made the battle actually easy to win for the DEO. Even if Indigo and Kara’s father destroyed some media credibility for Supergirl.

Also, you’d think if Kara’s spend this much time trying to rehabilitate her father that she’d be more worried over his disappearance.

I do always like some Director Bones, and Chase and Lar-On’s team up, I can get behind that.

This was definitely a better comic book than the previous books. I think what’s important here is the small story. In many ways, this was a character study of who Kara is, what her enhanced powers mean, and how she too must rebuild her Supergirl life. Too often, writers of superheroes get caught in huge narratives of good and evil, but smaller stories do bring more out about our heroes.

What I found most silly was how quickly Supergirl found her qi. If only being able to find your way, your place, and your energy in this world was that easy! Not sure how I feel about I-Ching.

This was my first comic book with Kenan. He seems like a nice guy and very Superman. It would’ve been nice if he and Kara had more interactions in the future, or even in their fight.

Always a fan of Krypto. I hope this is foreshadowing that Streaky will be making an appearance. I assume the Danvers are cat people.

The fight or defending of Red Rocket was great to show the conflict in Supergirl. And it showed her character that she wants people to get along. She used her brain to freeze and destroy Red Rocket’s suit, and then everyone worked together to rebuilt the village. Strangers are scary, but those we know aren’t.

Cat Grant may be surprised when Supergirl knows exactly what her plans are.

I did like Luis’ pencils. The action was well-done, and Supergirl drawn as a strong young woman. The shadows were a little too deep in some places, such as I-Ching’s wrinkles. Not sure if it was Luis or Rapmund’s inks.

Now I want some dumplings.