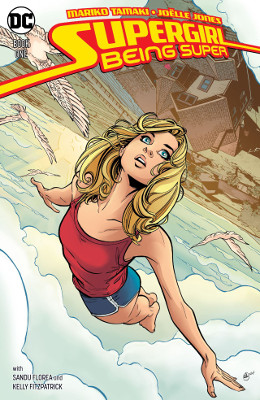 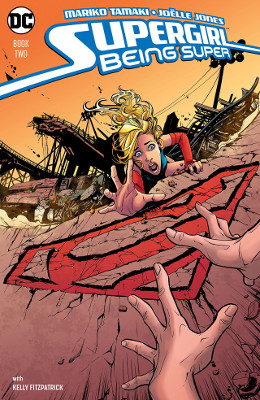 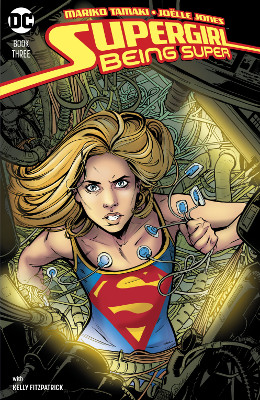 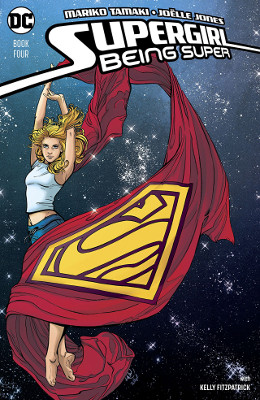 So if we’re going to compare Supergirl serieses (seri?) here, this one wins hands down. I’m not sure if it’s going to fold into the other story at the end and this is the beginning here, but dang this series has a lot of heart.

Here, Kara only has her human parents who know she’s an alien. Otherwise, everyone else thinks she’s just a normal teenager with zits. Dolly and Jen are her best friends, and they all do high school track together. Kara just runs a little slower than normal.

What I appreciated here was Kara just being a teenage girl. The zit was gross, but Tamaki tricked the readers into thinking it was just being a teenager. Dolly and Jen make fun of her about it. Her parents do too. You don’t expect it to explode all over the bathroom and be a cleaning mess. Though clearly there are things about Kryptonian puberty we don’t know about.

And maybe there’s something else going on with Kara. (I’m kind of betting on those training bracelets.)

I love how homey Kara’s mom was and how her father is basically Ron Swanson. I can see Ron with an alien daughter and just dealing with it.

I suppose we’ll see how Kara might use her powers to save her friends. That would be hard. It seems though like really bad things always happen to superheros to make them use their powers. If I had Kara’s powers, I’m not sure I would’ve had to reveal myself to anyone in order to save them from doom, destruction, and death. Like I can’t recall a time where I could’ve saved my friend from falling in a crack in the earth or from getting run over by a truck.

This continues to be so good. Like I hate to say that this is blowing the other Supergirl title out of the water, but it is. This is also probably the type of Kara story that those Supergirl TV show fans, especially the younger ones, are going to be most interested and invested in.

The entire scene where Kara tries to save Jen was just heartbreaking and gut wrenching. You see Kara make the choice to show her powers to the world in order to save her friend. But then, it doesn’t work. Whatever is going on with Kara’s powers, they fail on her.

Jen dies. You, the reader, feel it. Again, YA shows the way of how to tell tough stories and doesn’t stray from these subjects because of the reader’s possible age.

Kara’s parents were great here. Seriously, as someone who’s best friend died in high school (in an un-saveable by a superhero way), this is how I wished my parents acted. Though I can see why Kara wants her father to question why she didn’t use her powers, or if they worked at all.

I did really love the evolution of her friendship with Dolly. They are both grieving together. But I appreciated that Dolly’s first question wasn’t around Kara’s powers, that it was instead about missing their mutual friend. The scene where they hang at the diner was wonderful. Jones’ art shines through. (Though I am always a huge fan of her work, and how the women in her stories interact with the world around them.)

I am very suspicious about that coach and those fitbit things.

I completely called it that it was Coach Stone and those fitbit things. Finding a reuseable power source seems like series of tests that Kara would willingly put herself through, if they weren’t cruel or against her will. Or caused earthquakes that resulted in the death of her friend.

The school seems a little in-your-face with the grief counseling. Like seriously teacher, writing the dead people’s names up on the board was rather ridiculous.

Poor Dolly. Kara may have baggage from the reactions of her grandparents when she saved them from dying in a fire. However, Dolly seems to be more than okay with Kara’s superpowers. Also, if this universe is like any DCU place, there are likely other superpowered folks.

Are all Ons always bad? Do they always fight or act in opposition to the Els? There’s much I need to learn about the Superman verse.

Tar-On is not as trustworthy as Kara thinks. Of course, she doesn’t know him. Of course, she barely remembers her people and is going to be interested in anyone like her. Especially when they are a cute boy.

This issue was a little weaker than the others. Mostly because Tamaki had a lot of plots of wrap up. I will say that the very end, in which Supergirl seeks out Superman, was the best ending this book could’ve done.

It was unsurprising that the book’s big fight was actually between Tar-On and Kara. Coach Stone may have been amoral, but she’s still a human. Kara wouldn’t kill her. But unlike Tar-On, she also wasn’t tortured by Coach Stone for years. I’m okay with these “no kills” values, but sometimes as creators escalate the situations, I always think about how the death penalty is still a thing in the United States (where most superhero books from DC are based).

I haven’t talked a lot about Jones’ art here. I’m a big Jones fan. I love her style, and I believe this is the first time I’ve seen her draw young people in particular. She does wonders with these teens who are just on the verge of adulthood. They are appropriate. Kind of awkward. But also have that beauty of youth.

It’s hard for me to believe that Kara wouldn’t have had a more formal goodbye with her parents. However, for the book’s story, it made more sense that moment would be with Dolly. And also at Jen’s grave. It was fitting that Kara rescued Dolly from danger and death, when she couldn’t with Jen. I also appreciated how Tamaki gave Dolly a new friend, and showed that she still missed Kara.

Kara in the diner was some of my favorite art here. It conveyed so much about her emotional state. I also loved the choice of not having Superman say anything.

Definitely one of the best YA comics I’ve read in recent years from DC or Marvel. And a lovely story about Kara.