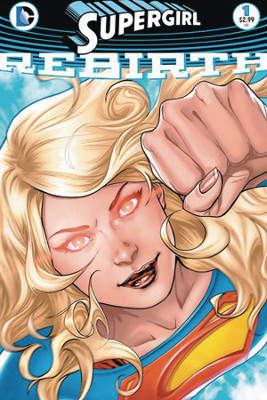 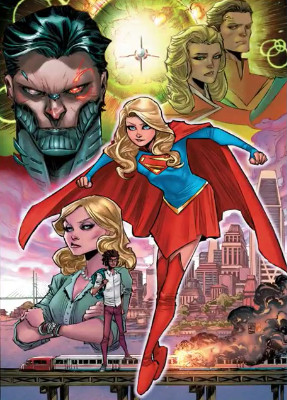 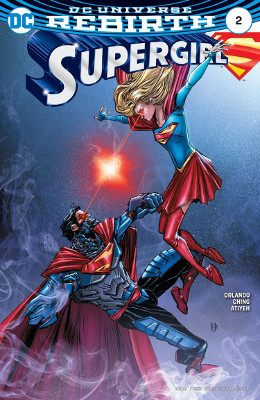 This is an interesting take on Supergirl. Though I have to admit that it made me really just miss the Supergirl TV show and kind of want this to be a tie-in.

I think the setup with Chase as head of the DEO and Jeremiah and Eliza Danvers as Kara’s parents works okay. I’ll be interested to see how Orlando will adapt it. But also longing for the TV show setup…

Not sure how I feel about Lar-on. Or how Kara isn’t excited about another Kryptonian coming to Earth. Kind of odd especially that he knew her father.

Okay, I have hope for this book, and I will continue reading.

Can Orlando write Cat Grant all the time? Seriously, this is the just the best. I love how she’s taking on the train heist guys by herself by locking them out of their devices and figuring out who their bosses are. So Cat to get upset with Supergirl for saving the day and ruining her plan.

Chase is a little too tough love for Kara. I do hope that Orlando is able to dive into Chase’s characterization a bit more. Andreyko did such a good job at humanizing Chase without making her any less of a badass bitch in Manhunter, and I hope that Orlando can capture that here.

I do find it harder to believe that Kara would be that rosey glasses about Kryptonian society. Sure, TV Kara, who was still a child, she would. But teenager Kara? Maybe she just had such a loving family that she didn’t see the cracks in society. I was pretty cynical about society as a teenager. I mean, maybe there’s some nostalgia I don’t understand since her people are supposed to be dead.

I’ve always wondered about super hearing. I’m sensitive to noises, and I don’t blame Supergirl for wanting some quiet. Love that she gets her own part of the Fortress of Solitude. But, of course, her creepy dad is a robot creature or one who thinks he’s her dad.

Cat Grant continues to be my favorite part of this book. I want more of this part of Kara’s world. I care a lot less about Zor-el Brainiac trying to revive a version of Argo city. Kryptonians don’t exactly endear me. They always come off as fascists, who don’t see that their planet is dying off. Speaking of which, why hasn’t anyone wrote a really good environmentalist story about them? Now that would be interesting.

I loved Cat’s advice to Kara about making herself stand up and speaking out. Plus, she already knows that Kara’s smart and top of her class. But Cat does still intimidate her. I liked Kara’s comment about how Cat’s heartbeat said she wasn’t lying about being able to read body language.

Not sure what I think of Ben. Somehow, knowing Kara, they will eventually become friends.

Kara sure got a ton of extra clothing for fake Argo. I assume everyone else there will be robots. Will Superman be there too?