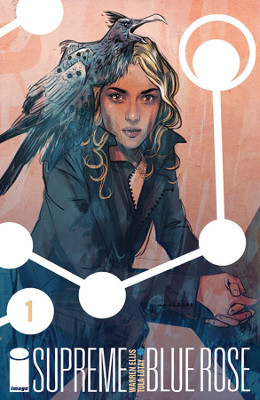 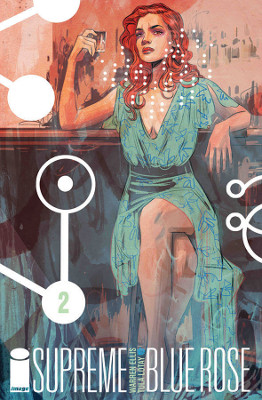 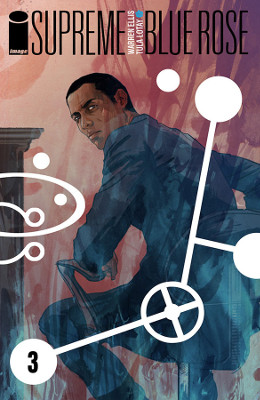 If anyone knows how to set up a first issue, it’s Ellis. He’s a master worldbuilder, and he excels at giving you a ton of information without feeling like you’re getting too much exposition. I’ve been wanting to read this series for a while since I love Lotay’s art, and her art doesn’t disappoint here. It’s so complex and layers and downright gorgeous.

I’m really intrigued by Diana Dane’s world. Clearly, we’ll be learning more about Enigma’s function, the Princess of Saturn, and the cycles of this reality. Because it appears that there are cycles or rebirths build into the ecosystem.

I’m also pleased to see Ellis put in modern technology offhandedly and like people would actually use it, such as when Diana takes a photo for Instagram.

Darius Dax does seem really too full of himself to not be evil. That golden arc logo over his desk calls it out. But yes, he knows Diana isn’t going to turn down the money. Now, if she doesn’t succeed in her mission, will she actually feel guilty about it? Who knows. Perhaps Darius was just planting the seed for later. That and sending Reuben.

Diana’s roommate Noor is perhaps my favorite character. I love how she’s no shit about how terrible the modeling world is. Probably laughed way too hard at that Karl Lagerfeld joke. She’s right about it being an impossible sum of money to turn down. I hope there’s more Noor, especially as Diana must travel for her assignment.

I have no idea about this Professor Night bit or how it will be incorporated into the greater story.

So now our Princess of Saturn is a muse of sorts. Or the “only woman who tries to save” a man. I’m interested to see how Ellis plays with this trope. Especially as the multiverse or whatever else is happening here get revealed.

Linda’s pretty great and Chelsea’s intriguing. I hope that Ellis has the time in this limited series to flesh them out and grow them. Especially since we have two Chelseas now. One with some universal knowledge happening.

We will see exactly what Diana’s dreaming about and what dreaming means.

This issue introduced us to a ton of new information about the universe, but also felt light on information and moving our plot forward. But that could be because we don’t know much yet.

Lotay’s art remains so critical to this story, and for me, what really pushes it forward. It’s just gorgeous. The screenprint-style overlays are beautiful. I am wondering about so many of these symbols and what they will mean for our characters in the long run.

Speaking of design, Doc Rocket may just be Lotay and Ellis outdoing themselves. Like so fanciful and a kick against astronaut stereotypes, but with a clear Back to the Future vibe.

Diana is kind of sure she’s got a shit job now. I like that the shiny paint has already worn off in no time. Especially as she trudges toward Littlehaven on foot so not to disturb people. I love how non-alarming and casual her outfit is too.

Linda, the limo driver, and Diana are so gay. I hope we get them hooking up. Would be better than ghost creatures or others in Diana’s path. (I can’t quite tell, the story lost me a bit here.)

The road seems so sad. Almost as sad as the Princess and her conversation with Darius. They both seem like two people who are searching for truth in a world where the truth is constantly being overwritten. Somehow I don’t think Ethan Crane will actually help.