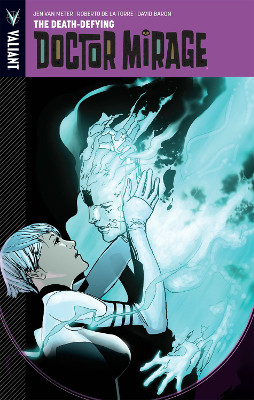 This book was very much hit or miss for me. There were aspects of Shan Fong’s story that I greatly appreciate and other parts that were muddled and seemingly without direction. This was the first Valiant title I’ve ever read so I’m completely unfamiliar with the universe and its rules. However, from what I’ve seen, they’ve been relaunching it and the stories are supposed to build the world for readers.

Van Meter did a wonderful job at showing the story between Shan and Hwen. About explaining how they met and how he died. I bought their epic love story which continued beyond Hwen’s death. I felt Shan’s pain over losing him and her depression and self-imposed isolation and how she locked herself away in the house they built together.

Torre’s art was somewhat of a miss for me. The scratchy and sketchy nature of it sometimes complimented the story and in other cases made it more muddled. With the otherworldly creatures, I wanted more definition. Torre’s art also didn’t lend itself to a wide variety of facial expressions. I would’ve loved to see more emotion from Shan’s face, especially since so much of this book’s narrative rode on emotions. END_OF_DOCUMENT_TOKEN_TO_BE_REPLACED