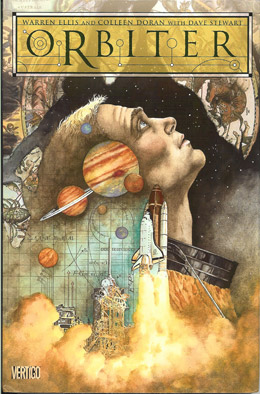 If you’re going to read Orbiter, I suggest one thing: be a giant space fan. This is Ellis’ love letter to space. In fact, he writes a foreword in which he tells space he’d like a date with it on Friday at 8 p.m. And how humanity will benefit greatly from space travel. If we’d just go there already, dammit. I tend to agree with this statement, and predictably, I enjoyed this tale.

Orbiter takes place in the not-so-distant future. Here there has not been a manned (or womaned) space flight in 10 years, and the Kennedy Space Center grounds has become something of a tent-city. The beginning is interesting in that it’s the only real time we get a glimpse of what life outside the privileged scientists and doctors’ world-view looks like. Apparently, things are no good.

And while I wouldn’t considered Ellis’ vision of a not-so-distant future to be dystopian, it is still a further decline in terms of need and humanity’s destruction of Earth. Clearly, Ellis believes that humanity needs to explore space, not just because it’s cool and the final frontier, but for the survival of the species due to a dying planet.

Suddenly, a space shuttle called the Venture lands at Kennedy Space Center and ominously, the Venture kills the people who’ve camped out on its runway. The Venture’s been missing in space for 10 years. And it’s the reason the space program was shut down. END_OF_DOCUMENT_TOKEN_TO_BE_REPLACED