This makes me even more glad that Etta marries Steve. Because seriously, what a bunch of assholes. I hope every night when Steve closes his eyes, he feels guilty for being such a jerk. (Yes, I *know* DC messed with the worlds that the Golden Age stuff is supposed to take place on.) And of course, the only reason Etta sent the telegram is because she wanted Diana there. She even lets her bring Steve along. END_OF_DOCUMENT_TOKEN_TO_BE_REPLACED 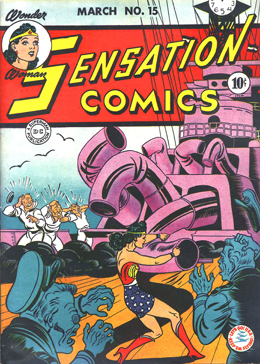 Anywho, there’s an explosion in Diana’s office while Steve’s there; but during the explosion, Diana’s civilian clothes are destroyed, revealing her Wonder Woman costume underneath. Which leaves Steve being like ‘where’s Diana? OMG, is she dead?” Luckily, Wonder Woman finds a rug, rolls it up, and dresses it in her extra Diana clothing. At first, Steve’s a little bit like ‘wow, Diana looks like a limp rug’ and then he’s like ‘holy cow, arms don’t move like that.’ But Steve believes Wonder Woman as she whisks off rug!Diana to the hospital. END_OF_DOCUMENT_TOKEN_TO_BE_REPLACED

Steve heads over to question Ann about Paula. She says Paula pretended to be a government inspector, and then some Nazi guy (who we never see again) calls Ann into the warehouse. Where she’s hit over the head. END_OF_DOCUMENT_TOKEN_TO_BE_REPLACED

After Diana’s Day on Paradise Island, this tale was a little lackluster. Perhaps the most interesting comment which Marston makes is that while the Amazons may be better at working on rehabilitation than American prisons, neither can keep Baroness Paula under their control. END_OF_DOCUMENT_TOKEN_TO_BE_REPLACED 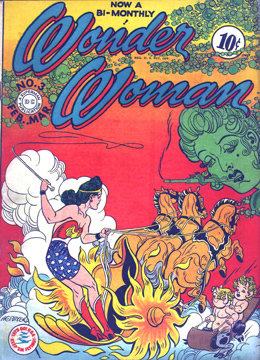 When Diana and Steve go to the jail, Paula escapes right in front of them. Once again, she’s used her charm to get away and out of the guards’ view. END_OF_DOCUMENT_TOKEN_TO_BE_REPLACED 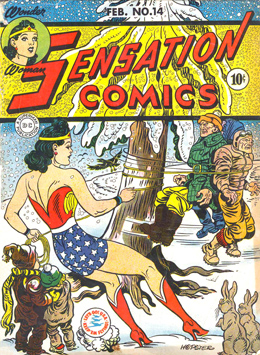 An often underused power of Wonder Woman’s is her ability to talk with animals and plants. In fact, I don’t believe she has used this power at all so far. But don’t fret, Fir and her chat. This is also a Christmas story. END_OF_DOCUMENT_TOKEN_TO_BE_REPLACED 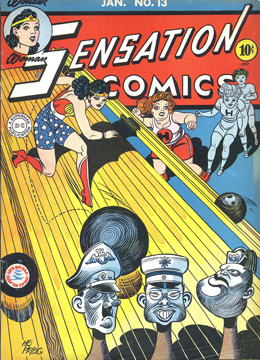 The story opens with Steve Trevor crying over a newspaper headline that Wonder Woman’s dead. END_OF_DOCUMENT_TOKEN_TO_BE_REPLACED

Wonder Woman being Wonder Woman and so in love with Steve Trevor, she does not fall for Count Crafti’s seduction. In fact, she just tries to sell him war bonds. (She’s always hawking war bonds these days. In fact, this issue ends with a short that I won’t cover where she tells the tale of a stranded soldier to get you to buy war bonds.) END_OF_DOCUMENT_TOKEN_TO_BE_REPLACED

Meanwhile on Earth, Wonder Woman sells war bonds. In fact, Wonder Woman takes the record for selling the most war bonds. Everyone wants to buy them from her, and soon, she’s tired out. Luckily, there are some Hawaiian dancers there to entertain the audience of war bond buyers. END_OF_DOCUMENT_TOKEN_TO_BE_REPLACED

Anyway, together Wonder Woman and Steve spy on a top-level Nazi meeting. Hitler and the other Nazis plot to steal the US Treasury’s gold, a plot suggested by Mars’ agent Greed. Mars has sent Greed to Earth in order to capture Wonder Woman to bring her back to Mars, the planet. Steve and Wonder Woman hide in the 13th half-floor, spying from above. I’m sure there’s a Being John Malkovich joke in there somewhere. END_OF_DOCUMENT_TOKEN_TO_BE_REPLACED