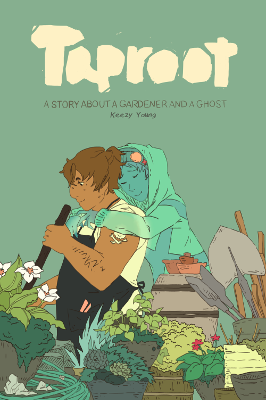 “I got you a book about gardening.” This is what my partner said when he brought this graphic novel home for me. It also is a queer novel. His assumption was very correct that I’d love it.

The main character Hamal can see and talk to ghosts. This is completely normal for him. He doesn’t think much of it, except that he likes his ghost friends and he doesn’t want his boss at the gardening center to think he’s too weird to employ. Weird because he’s always seemingly talking to no one.

However, when the Reaper comes after Hamal, we think the worst for Hamal and his ghost friends. Blue and Hamal’s other ghost friends keep getting sucked into a black ghost forest, believing their time as ghosts to be coming to an end.

Here, Young’s art stands out. She does an incredible job at showing the difference between the two worlds through shapes and color. You immediately feel Blue’s fear of disappearing forever and his trepidation in telling Hamal what’s happening.

It’s rather adorable seeing them both pontificate on the identity of this necromancer the Reaper seeks. Of course, we readers know it’s Hamal.

Building throughout the overall plot is the love and affection Blue has for Hamal. Because we so intensely understand Blue’s feelings, Hamal’s own attraction is somewhat sidelined. Blue, of course, believes that Hamal should be with a human. He even tries to encourage Hamal to date cute Chloe, who makes all kinds of excuses to buy new plants.

When the Reaper finally does show up, he really just wants Hamal to get his necromancer license. He also warns Hamal that his green thumb magic comes with a cost. Hamal is the source of the ghost forest. The force is unbalanced. Hamal must correct this.

As a gardener myself, I can completely understand the urge to grow all the things. Right now, I’m sad it’s winter and my garden is mostly dormant. But that’s the natural world’s cycle of growth, harvest, and death.

Young masterfully weaves the story of who Blue was into Blue’s ultimate sacrifice through Hamal’s magic to restore the balance. Hamal also realizes how much he loves him back. It’s in that moment we get more of Hamal’s interior life, and how the ghosts, particularly Blue, were really his only friends.

Of course, Young makes this a happy ending. Blue comes back. Comes back as human so he and Hamal can realize their true love for each other.

Young also smartly sets the story up for future volumes. Which I very much hope she does create them. She tells a story about an enchanted object of a dead girl’s which causes a haunting. Together, Hamal and Blue make everything right.