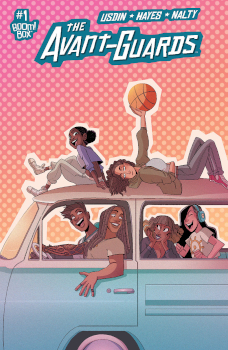 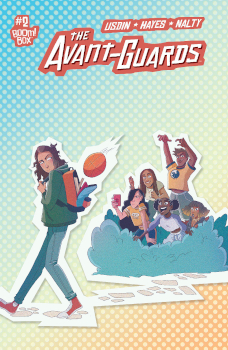 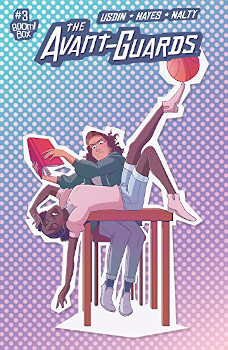 I really like Charlie. I feel her aloofness in the way Usdin writes her and in Hayes’ illustrations. She’s the new kid at school and hasn’t made any friends yet.

Wow, all school clubs are so desperate. It felt too true to those early moments in college with all the options, but you are not sure if they are right for you. I’ve also frightened incoming students from behind the booth.

I love the quirks that we’re already learning about the Avant-Guards and how Charlie accidentally keeps running into them. I like how she was secretly on the basketball team at her last school. Liv is the best in gathering people to her, and it’s always delightful to see a community builder in a comic book.

This book is cute and sweet, and I loved the ending where Charlie was invited to eat with the rest of the Avant-Guards. I’m looking forward to seeing how this world expands and grows, along with these characters. I’m not a huge sports fan, so we’ll see how this goes.

This remains adorable and eager. It’s precisely the type of book I love to read these days because the world is awful, and I need something sweet and gentle.

Olivia is over-the-top. She’s kind-hearted, but I’m surprised Charlie didn’t get majorly angry at the stalking. The weirdass stalking.

I don’t understand how they can have a full team with Ashley injured. I suppose she could join them mid-season, but it seems like they wouldn’t have enough players still. Things like this probably aren’t worth dwelling on too closely.

While I enjoyed the other characters’ point-of-view, the story did feel tighter and more cohesive in issue #1. Except for Olivia, Charlie seems like the character who is the most fleshed out and realized in this narrative. Though I’ve known a Tiffany or two in college, so even if she’s the most ridiculous, she may not be the most off-kilter.

Let’s see how this team shapes up.

This book isn’t blowing me away, but it’s entertaining, cute, and with some heart. I’m a fan these days of less cynical media, and The Avant-Guards certainly fits that.

There were great touches showing how they were at a liberal arts college. The play set on the side of the court was particularly a subtle touch. Especially when compared to Charlie’s explanation of how she transferred to get away from basketball, but also the high-pressure world of athleticism. I can understand Charlie as I stopped playing soccer after 6th grade because it was already becoming incredibly competitive. Not to mention the overbearing and asshole adults who push kids like it’s the Superbowl.

Oliva’s dramatic cheering on of the team and ordering them all matching tracksuits was far more charming than her stalking and persuasion of Charlie in the last issue.

Of course, I loved the dogs. I’d be so distracted if there were a cuddly dog around.

This issue was great for getting to know Ashley better. I enjoyed how supportive she was of the team as their coach, how surprised she got when they were good and won, and how much she did say she wanted them just to have fun. Even if Ashely wouldn’t talk about how she got injured. Her going over everyone’s inadequate footwear on the first practice day was great.

The canine CPR manikin, plus Jay knowing what it was, was another fun gag. They do make both dog and cat CPR manikins. Also, I am now distracted by Rachel Ray and a veterinarian practicing doggie CPR on these manikins.