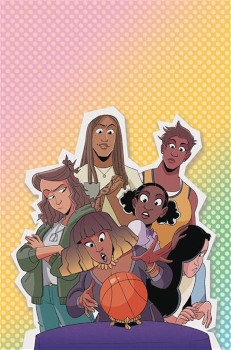 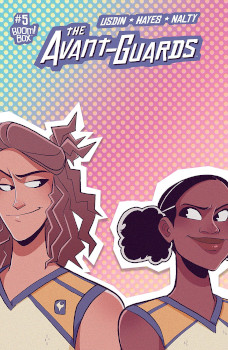 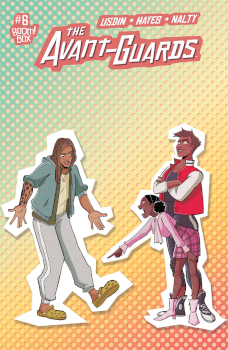 This is some absolutely relatable two queer ladies trying to get together content. Though Liv is a little more forceful, but just full of so many emotions about how she feels about Charlie. She needs to learn that it’s not all about the grand gesture; regular moves can also convey your attraction.

Nicole does not seem like a grand gesture, or even a true love type of character. Laidback dating is more her style. Also, as a bisexual person, I was so happy that no one said anything about Nicole going home with a guy, or Liv wasn’t somehow upset or jealous about him being a man.

Charlie is quite adorable in how she flirts. The will-they-won’t-they scenes were pretty sweet. Though with basketball cancelled until further notice, how will they continue to connect? Maybe this romance will just have to get a little more focus.

Tiffany’s coven in the background of the scenes when Liv and Charlie were outside kept cracking me up. It was a nice visual gag.

I’m not sure how this series will wrap up in eight issues. Especially since it’s already issue five, and we’re only just getting to know Jay and the league is in trouble, so they aren’t even playing basketball currently.

Perhaps, the real point of the series was the will-they-won’t-they between Charlie and Liv. Perhaps, I kind of thought we were going to be more focused on the team coming together and Charlie’s first year, given how the first couple issues were set up.

Jay was too cute about their partner Tyler. It felt so realistic how nervous they were for their friends and team to meet Tyler. But of course, Tyler is lovely. The reveal at the end that Jay’s last piece was a portrait of Tyler was lovely.

The multiple artists on the book did change how it felt. At least Hayes continued to pencil it all, but some of the choices were different, and the art felt flattened.

Liv has the worst excuses. She should just do what makes her happy. The team will definitely be behind them getting together, as long as they never break up. (Though they are lesbians, so they will remain friends forever, and Liv and Nicole already dated and there’s no bad feelings there.)

Well, I was complaining about games, and in this issue, the team played three games total. One they won by default since the other team didn’t have regulation uniforms and had to forfeit. I did like the arc of them finally losing a game, even if it was devastating to see Liv shoot a basket on the wrong side.

This issue, we’re back learning more about Ashley. It also feels like perhaps she is the character Usdin should’ve been using as the main point-of-view since the first issue. (We still don’t know a lot about Nicole or Tiffany, and it seems odd we haven’t checked in with Charlie.)

It is interesting to hear Ash’s internal monologue about how she views herself as a star, both in basketball and singing. I’m surprised that she’s able to coach them so well. While we don’t know how great of player she actually is, it seems like this team would be too green to accommodate a star. (Of course, I also thought Charlie would be the team star.) I do like how Jay keeps Ash in check.

The older lady referee poking herself on Gwen’s collar cracked me up.

I was a little let down by Ash’s costume to her birthday karaoke party. There weren’t enough outrageous accessories in my mind. Though Ash would definitely have to be a great singer to pull off Beyoncé’s “Love on Top.”

I do want to know what Nicole’s art school talent is.

Overall, this issue was cute, but the point-of-view direction I find lacking and the pacing of the overall story continues to falter, but we may be too far into the story for it to gel. I do think pacing, in a series of single issues, is much harder for comic book creators than prose- or graphic novel-only creators.