It’s that time, to ring in the New Year with comic book recommendations. These are my favorite (and least favorite) comic books that I reviewed in 2017.

Yes, there may have been one day where I just sat down, read, and reviewed most of Rucka’s most recent Wonder Woman run. Mostly because my friend Kevin was so excited about it (rightly so) and wanted to chat.

Looking forward to 2018, I really want to get caught up on all the single “current” issues I have. They are occupying one, overly full short box.

Fall of 2016, I started culling my pull list, and there will definitely be more of that in 2018. Likely less superhero comics and less overall volume of single issues. I also have shelves of older issues and graphic novels to occupy myself with, so it’s not like I won’t have anything to read and review.

28 different series eligible in this category. 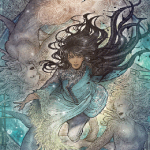 This book continues to be my favorite comic. It is my “if I could only read one comic, it would be this one.” Monstress is a fantasy about a young woman who goes on search for her dead mother’s secrets. It turns out there’s a lot of past. The world both Liu and Takeda create is fascinating. This story does not hold your hand through its characters’ traumas or hand you to the mystery in one neat box with a bow. 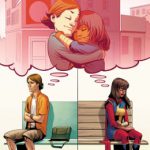 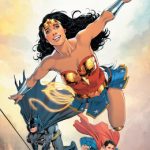 Rucka, Sharp, Scott, and Evely’s Wonder Woman was so freaking great. Definitely one of my top Wonder Woman runs. This was the perfect compliment to the movie that just came out too. I hoarded these, then binged them, and well, I haven’t read the next issues from the new creative team because I dread what I will find there. This are a must too for anyone who love Barbara Ann Minerva (Cheetah), Etta Candy, and Steve Trevor.

I was actually surprised The Wild Storm rated so highly on my list. (I was also this year, much harder on the books that I reviewed.) Not because I didn’t enjoy The Wild Storm — I did — but I didn’t think I’d liked it that much. I do continue to wonder if those who haven’t read Wildstorm comics before would have the same love and the same curiosity. I want to know how Ellis reimagined them. I already have love for Angela Spica (The Engineer), so it’s easy for me to be sucked into her world. 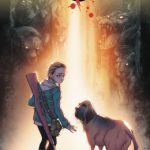 Oh, hi, it’s a book about animals gaining consciousness. They now talk and act like people. Everything is chaos too. And it centers around a tween girl and her dog. Also, it’s a little sinister, and not all the humans or the animals are good. There are many moral and ethical questions. The Pallas Cat is non binary. So this book was basically made for me. 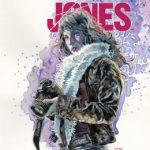 A bucket of nope (except Gaydos’ art, lovely as ever). Which was sad given how much I loved the original Jessica Jones run, and I did read beyond that for many years. This is one of those ‘you think I’m evil, but I’m undercover evil, and it’s ruining my life’ and ugh, so much ugh. It’s like someone at Marvel editorial came to Bendis after the Jessica Jones Netflix series got popular, and was like ‘let’s undo all Jessica’s growth to get her back to those days.’ I like character growth, and yes, that seems like an incredibly masochistic pursuit in superhero comics.

32 different series eligible in this category. 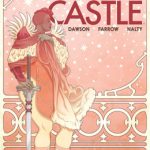 I wasn’t sure I would like this book, but Ladycastle had me almost immediately when the young woman being held captive in a tower has a pet snake and bakes cakes with anarchy symbols on them. This book is both a satire and a heartwarming tale about what it looks like when all the men die in a medieval town. We see women of all types working together. Each issue features a mythical outside force attacking the castle and how the women must defend it, using a variety of skills. Let’s just say they aren’t like the men who always rushed fist into violence. 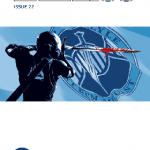 The book that predicted our future. Our future if Trumpelstiltskin, the GOP, and their ilk continue with letting corporations do whatever, make money for themselves, and give our tax money away. Rucka claims he didn’t access to a crystal ball when starting this series in 2013. Lark’s art continues to be masterful. He’s someone who understands how people move, and how to show that in comic book art. It’s masterful. Combined with Rucka’s characters and world building, this comic deserves a bigger following. After getting a friend to read this book, she confessed to me that “it was better than Saga” which she also loved. Get reading. 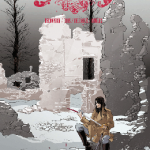 Pretty Deadly is a gorgeous book to look at. Rios allows the story to mold over her pencils. When I’m in yoga, my teacher often has us lay in a backbend over a yoga block and tells us to let go. This is Rios’ art, but instead of a block, it’s story. DeConnick further builds this mythological world of big ideas about Mother Earth and Death and takes us into World War I and the death of some of our favorite characters. 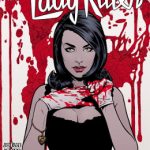 A favorite last year that I’m happy to have had another volume of. Jone’s story and picture perfect pin-up art takes up into the life of 60s housewife, Josie. Josie is, however, an assassin. Which means, those heels and dresses get covered in blood. This continues the consequences of the first volume and brings her family into the forefront of the story as Josie strikes out on her own in Florida. 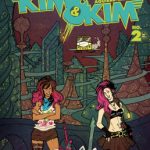 Queer women in space who are bounty hunters, sign me up. Kim & Kim isn’t perfect. Like who doesn’t always want their asymmetrical haircut in perfect picture alignment? But it’s fun, sassy, and a great read. It’s messy 20-somethings in space, discovering and uncovering who they are. Awesome space adventures don’t always pay the rent, friends. 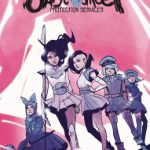 This was tie with Loose Ends. But I only read a single issue of it before deciding not to continue, whereas with Jade Street Protection Services, I kept reading and hoping it would get better. The potential I saw and the ultimate disappointment was what sealed this one’s fate. Magical school girls uncovering a dark mysteries and trying to save themselves should’ve been right up my boat, but the execution was a mess.

12 different novels eligible in this category. 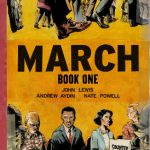 March tells John Lewis’ incredible story about his involvement and ultimately leadership in the 1960s Civil Rights movement. The story juxtaposes itself with his feelings during Obama’s first inauguration and his reflections on how far the US had come. Ultimately, it was both a hopeful read and somewhat of a sad read for me last year, given the election of our first white president (tm Ta-Nehisi Coates). Telling this story in graphic novel format makes it ultimately more accessible, and Powell’s illustrations give life to the story and the true suffering, bravery, and love. 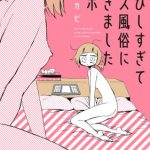 2. My Lesbian Experience with Loneliness by Nagata Kabi
Rating: 5/5 stars

As I mentioned in my book reviews, this is the first proper manga I’ve ever read. (I know, I know.) And I’ve heard it’s a bit different than others. It’s an autobiographical comic, and one that’s gotten lots of media hype and attention. It’s about the struggle of finding one’s path, depression and anxiety, and coming out. The most famous scenes are when Kabi decides to visit a prostitute in order to loose her virginity and have her first sexual experience with a woman. While well shown, it wasn’t the most powerful part of the story, which I think gets lost in other criticism. 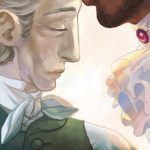 A sweet queer love story set in the 1800s. In a twist, the very human Ed is the “older” man (61-years-old) and the vampire Lucardo was turned at 33. This creates dilemmas for them that play out among Lucardo’s vampire family and Ed’s own worries about his future. Ed’s also middle class, while Lucardo is very wealthy. Heikkilä’s vampire world is fascinating, and this erotica tale — the first in hopefully a long series — brings fresh perspectives to the table. 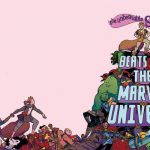 Extra cute and humorous, I’m pretty much a sucker for The Unbeatable Squirrel Girl. Henerson’s art brings Doreen’s world of going to college and superheroing to life and puts a smile on my face. I’ve been a fan of North’s for many years, and his puns always make me happy. Plus, I’ve learned so much about computer science. In this particularly stand alone graphic novel — which makes a great entry for anyone looking to jump into Squirrel Girl’s world — Doreen faces her greatest foe, an unbeatable copy of herself. 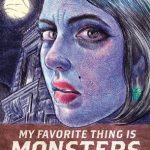 My Favorite Thing Is Monsters was one of the most challenging comics I read in 2017, both in format and subject matter. The subject matter is grim, magically realistic, and yet hopeful. I want Karen to have her happy werewolf ending. (Whatever that may look like.) The art deserves every single bit of hype it’s gotten. Stylized like a high school notebook, Ferris’ art adds layers and depths to the story in a way that shows off the true power and potential of comics as a medium. 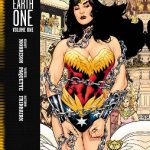 Pretty typical of about everything I don’t like in Wonder Woman comics. The story and art center themselves on the male gaze, and then attempts to make edgy comments on both a feminist all-women society and race. Because those are all things the world really needs Morrison’s commentary on.

What are you looking forward to reading in 2018?