I’ve been sitting on this essay, but in light of NPR naming Man-Eaters one of their favorite graphic novels in their 2019 Book Concierge, I’m publishing this as a counterpoint and why it shouldn’t be on that list. 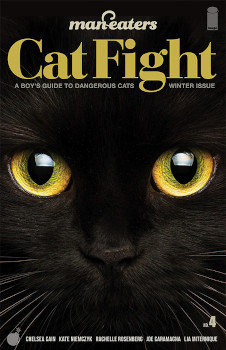 I wrote some glowing reviews for issues #1-3. Reviews, which at this point, I won’t ever publish.

Unfortunately, Cain has expressed a disinterest in talking about gender issues — namely gender identity and the many genders or non-genders a person could be — while writing a book about gender. Man-Eaters has become a binary gender essentialist text, and it breaks my heart.

It’s been a while since I’ve been so disappointed by a creator’s reaction and follow up to a critique. Not to mention, Cain’s racist doubling down on using the term “spirit animal.” (Which happened on her now-deleted Twitter account, but is still easy to Google.)

The focus on cis women, explicitly qualifying women as women through menstruation, was/is at the heart of this book. The basic premise of Man-Eaters is that menstruation turns people into deadly werepanthers, and this society is trying to prevent this from happening as these werepanthers kill people. The narrative focuses on a teenage cis girl who gets her first period.

When early Man-Eaters previews were solicited, Cain’s reps seemed to indicate that while there would be a ton about menstruation that menstruation wouldn’t be the only factor to turn a girl into a werepanther. They were managing, not truth-telling. (And yes, you can inclusively talk about menstruation!)

A massive flaw in the book’s first four issues is how much nothing happens, which means ultimately, it doesn’t say much, nor can it. As someone who’s loved Cain’s novel writing and her Mockingbird series, I was pretty surprised just how flat this story was. Cain’s thriller series, Archie Sheridan & Gretchen Lowell, features twists and cliffhangers to keep the reader hooked and moving.

And perhaps my own privilege around not thinking about hormones or hormone blockers did prevent me from seeing how estrogen in the water would be extra complicated for trans people. Not to mention post-menopausal people or those who’ve had breast or other cancers affected by estrogen.

Which brings us to Issue #4. Holy shit.

So with the plot not moving part — Issue #4 is entirely a fake magazine called Cat Fight. It’s like Highlights meets Teen, but for teenage boys in this world. This means the plot continues to go nowhere. This is 100 percent world-building.

I get that Cain probably looks at the creative fun of The Wicked + the Divine with magazines, specials, and funnies, and Bitch Planet, a clear inspiration, and wanted to do something similar. However, all those books earned the play they did. The Wicked + the Divine had over 20 issues before they did the magazine. We had plots and nuances. We knew the world and the characters. Most of Cat Fight seems like a waste.

Okay, now to the big honking trans erasure in this issue. I do not see how Cain could write this book without addressing trans and nonbinary people in this world. I don’t. But even if she walked that tightrope, in Cat Fight, there’s an “editorial essay” by a cis boy describing his stance on why he doesn’t like gender-neutral bathrooms. His point is that women could turn into werepanthers, especially in the place where their menstruation drops into the toilet, and he’s scared of being attacked, if forced to share bathrooms with women.

Now, this could’ve been some high satire on fearing anyone (except cis men) in public restrooms. This could’ve been Cain discussing the very real bathroom laws and other legislation being pushed around trans people’s right to pee in public restrooms. And her pushing back at the meaningless fear-mongering in the media and among conservative bigots, including adult cis men “proving” gender-neutral restrooms are dangerous and cis women filming children going in and out of women’s restrooms to gender police.

Instead — because Cain has declared Man-Eaters a trans-free book — it comes across as ignorant. It comes across as if it’s just silly to block someone from a restroom and as if that’s not something that would ever happen in the real world.

And that, my friends, is just disappointing and angering.