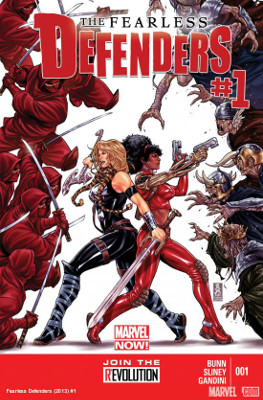 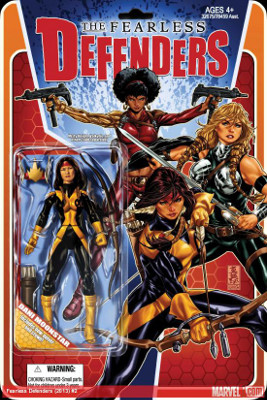 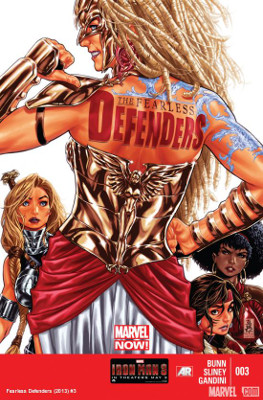 The Fearless Defenders #1 by Cullen Bunn
Art: Will Sliney

Yeah, the first few pages of this book were not good. They did not bring me into the world. In fact, they made me wonder why the hell I’d put this on my pull list. Bunn’s writing can, at times, be very literal, and he needs to be able to rely on his artist to draw things instead of having his text explain them. Likewise, Sliney’s art needs to step it up, and please, let’s have less gratuitous butt shots.

I am really interested in the team up of Misty Knight and Valkyrie. They could be a fun pair, and it looks like they’re bringing in Dani Moonstone next issue. Dr. Annabelle Riggs also seems like an interesting character.

I’m really happy that we’re putting more queer characters into the Marvel universe, but seriously, less awkward, embarrassing obvious would be cool. And Sliney could draw them less in a male gaze.

I really wanted more pirate slang when Misty was aboard that ship with the artifacts.

I’m looking forward to seeing how Bunn incorporates the flashbacks of whatever Valkyrie did that’s attracting the Doom Maidens’ wrath.

The Fearless Defenders #2 by Cullen Bunn
Art: Will Sliney

This book continues to straddle the line of good or really bad. Or perhaps so bad that it’s actually widely entertaining.

Sliney’s art needs some refinement. Sometimes, he’s got what women look like down. Other times, I wondering about their boobs and their butts and their lips.

I’d hoped that Dani Moonstar would be joining the team, but it looks like instead that she’ll be used for her magic powers to summon the Doom Maidens. That said, I’m less concerned about her ending up dead by the end of this tale.

I continually enjoy that Bunn keeps introducing more female characters. I feel like this is a on purpose move in this title, and it’s one that I’m definitely enjoying. I can get behind a tale of all ladies, whether villains, heroes, background characters, or somewhere in-between. (Except, of course, for Mr. Raven, the henchmen of Caroline Le Fey.)

Seems like we might be mixing up a lot of mythologies with someone named Le Fey and bringing Dani into it. I’m okay with this getting messy. And I’ll assume that will mean some delightful commentary from Annabelle.

Interesting that the All-Mother believes the Doom Maidens to be summoned because Valkyrie hasn’t gathered a women’s warrior group. (Even though there was that short-lived one with She-Hulk, Thundra, and Sue Storm.)

I have to admit that every time I see Hippolyta as a name, I just think of Wonder Woman’s mom. Wait… wrong publishing company.

The Fearless Defenders #3 by Cullen Bunn
Art: Will Sliney

Sliney’s art just way too crowded. I appreciate that he’s filling out the background — so many artists take shortcuts to getting stuff done and don’t — but there’s just too much stuff everywhere. I’d like to see some more structured art helping this story out.

Annabelle is my favorite new character. I love her crush on Valkyrie and that she’s surprised as heck to be pulled into the mission. Misty, though, wins for the best dialog.

Hela spent a little too much time justifying why they need Hippolyta. I think we all agree that more muscle is better. She must want the Doom Maidens for herself.

The more I see of the situation with Moonstar and Caroline Le Fay locking her up, I feel totally skeeved out.

Arnleif, Aldvi, Balda, Hermotha, Sigotta, Daggaergh, Disthora, and Nedra have been waiting a little while to get their fight on. But I love the twist at the end where they recognize Valkyrie as one of their own.

Get your Doom Maiden on and buy Fearless Defenders Volume 1: Doom Maidens