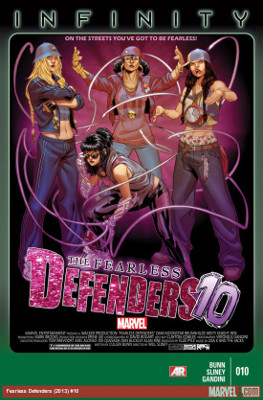 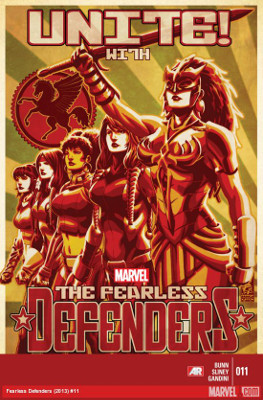 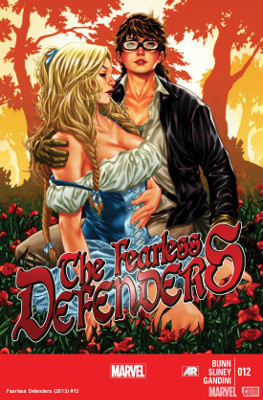 The Fearless Defenders #10 by Cullen Bunn
Art: Will Sliney

Now this is how you do a crossover when you’re forced to tie into a major event. The introduction of Ren was pretty awesome, and I love how she figures out how to play on her strengths to join in the battle.

It seems like Annabelle has love interests everywhere. 🙂 Of this, I am in total favor.

I know it’s probably an unpopular fannish opinion, I like that Clea immediately asks Doctor Strange for a divorce. Even if it was because she saw him with all the ladies.

Seems like we’re going to be using the people in those cocoons as canon fodder. Well, I assume that the final battle with Le Fey will be a bloody one.

That said, I know that this title’s getting canceled, and I’m curious how it’s all going to be wrapped up in the next two issues.

The Fearless Defenders #11 by Cullen Bunn
Art: Will Sliney

I feel pretty awful for Bunn and Sliney as it’s pretty clear that they didn’t know the series had been cancelled until this issue was finished. This makes me sad. Even if this issue made me feel that they were getting a little gratuitous with ladies. (Or at least wondering what happened to the main plot thread that they introduced way back at the beginning and never solved.)

It’s a little odd to me that they’d bring in Echidna, the mother of all monsters, when Batwoman just had an arc about her. But the two big companies are always doing the same types of plots. Even if Le Fey was controlling Echidna and Aradnea.

It rubbed me the wrong way that Annabelle would hook up with Ren while still sharing a body with Valkyrie. I mean, Annabelle interrupted when Valkyrie tried to hook up with Venom. Just seems that you don’t have non-pre-approved hookups when you share a body with someone. Like if you’re sick, are you both sick? If you get pregnant, are you both? I don’t know. Occasionally, I feel Bunn doesn’t know how women think and this feels that a type of bro-agreement. Also complicated by the fact that Annabelle had a crush on Valkyrie.

I’m not a huge fan of Hippolyta now being all destiny about the Amazons seemingly upcoming civil war and her taking over for Ares.

Again, I just have no idea how this book is going to end. There have been just way too many plots recently introduced.

The Fearless Defenders #12 by Cullen Bunn
Art: Will Sliney

I suppose that they did what they could with the final issue, but it was a pretty unsatisfactory ending. Even Val and Annabelle didn’t have the pages to work out what happened. Val should be pretty angry that Annabelle agreed to be a leash and share her body. I mean, maybe Annabelle didn’t know exactly what the All-Mother would do, but she had to have some idea.

I could’ve lived without Morgan Le Fey’s terrible navel dress. Seriously, does anyone see red carpet stars walking around in dresses cut down to their navel? Very rarely. So why is this a fashion trend in comic book art? It’s bad enough that so much of comics features bad clothing, but so few artists have evolved since the ’80s/90s and the height of Janet’s being a fashion maven have even thought about changing clothing trends. Just stop with the navel showing dresses and catsuits. No amount of boob tape will keep them up for more than a few hours and certainly not during a fight or having any other worries besides looking good. This is so incredibly frustrating.

Frankie doth protest too much about superheroing. Like she doesn’t know why they were there. I like how the count of Defenders was off due to Annabelle and Val sharing a body.

I’ve had mixed feelings about this book for a while. There are things I love about it: all-women team, getting to know the characters, lots of queer women, women of color, etc. But there are things that have just bothered me: lesbian scenes that seem more for readers than character, cut-to-the-navel dresses and catsuits, coherency of plot, etc. And my miedx feelings means I’m more sad the book’s canceled due to low sales because it will be used in the “see books about women teams don’t sell” than anything else. To be perfectly honest, if I had to budget down my comics shopping, this book probably would’ve been removed from my pull list a while ago.

Finish up the run and buy Fearless Defenders Volume 2: The Most Fabulous Fighting Team of All