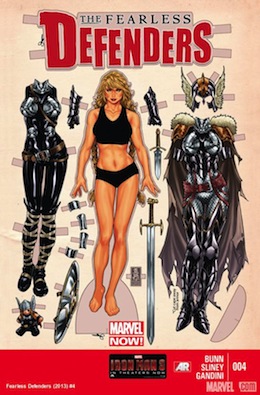 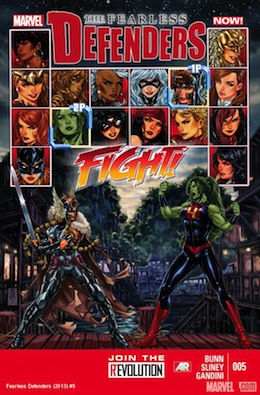 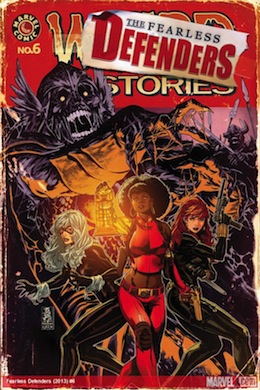 The Fearless Defenders #4 by Cullen Bunn
Art: Will Sliney

Super happy that they rescued Dani from her captures. Otherwise, that was just getting downright wrong. Though I do think that Caroline gave her up without a fight. Or beyond just the general battle with the Doom Maidens.

I don’t think Misty and Annabelle will be out of the fight for long. They may be playing backup and Oracle, but they neither of them are ones to sit at the sidelines. Especially when the very obvious answer of who’s going to be the new Valkyries is right there.

I guess that would be my biggest issue with this book that it’s too simple. Maybe we don’t know how they’ll defeat the Doom Maidens yet. But the question of Valkyrie finally putting together a team of her own is majorly obvious.

The Fearless Defenders #5 by Cullen Bunn
Art: Will Sliney

Hrm…Misty rounds up a bunch of women to be Valkyries and then nothing happens. Valkyrie also is doing something in her own corner where she becomes Brunhilde, which is what Caroline was certainly looking for.

I did really like that Valkyrie can see a difference in the women who are destined to be great. Like Annabelle, when most people just see her as a human in need of protection.

Mr. Raven’s generic sexist comments were just boring. Like Dani really needed a reason to kick his ass. They already captured and imprisoned her in stone to seep her magic from her. That’s pretty much all the motivation you need to kick someone’s ass.

The Fearless Defenders #6 by Cullen Bunn
Art: Will Sliney

OMG, they killed Annabelle. I do not like that! She’s the best.

I figured there would be a cheesy Annabelle changes Valkyrie back from a Doom Maiden via love. But I didn’t expect her to die at Valkyrie’s hands.

And I still don’t get why Valkyrie doesn’t want to choose new Shield Maidens. I mean, didn’t she learn her lesson about needing to?

I’m not sure how Caroline’s going to convince those women to become the new Doom Maidens and be under her control. Most of those villains on her screen are pretty independent operators. They aren’t ones for playing in a group.

Who might be a Doom Maiden? Buy Fearless Defenders Volume 1: Doom Maidens