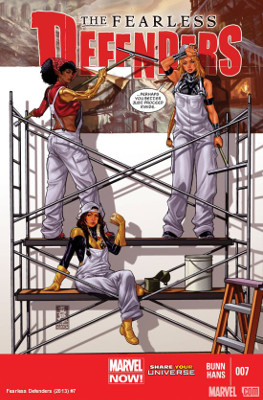 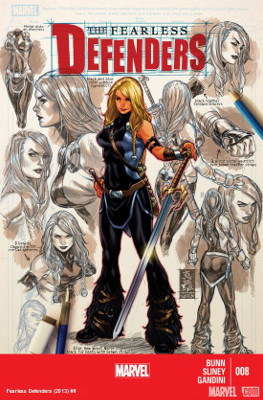 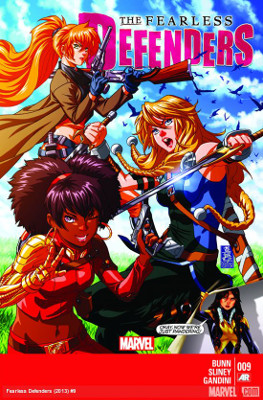 I’m surprised that Valkyrie was able to get Annabelle out of Valhalla so easily. I mean, obviously, Clea’s spell had consequences as Valkyrie and Annabelle seem to be sharing a body. But really, I expected more of a fight.

Hans’ art was beautiful. Finally, I feel the art was worthy of the book. It was simply gorgeous and full of heavenly beauty. I hope that Hans sticks around.

Misty is going to be happy to Annabelle back, but somehow I think she’s going to be the one knocking everyone back to their senses. As seems to be her job. (I’m also wondering if and when Colleen’s going to join the crew.)

Love the details about how Valhalla isn’t Annabelle’s idea of heaven. Those other warriors were certainly in paradise though.

The Fearless Defenders #8 by Cullen Bunn
Art: Will Sliney

Sad to see that Sliney is back, and it looks like Hans won’t be continuing with the book. I’d like that a lot. Right now, I’m just not sure why I’m seeing so many belly shirts. Seems like you wouldn’t want to be exposing that while fighting, especially if say you only have kung fu skills and a bionic arm like Misty.

Pretty excited to have Elsa Bloodstone in this book. I’m not sure that Bunn’s found her voice though.

Interesting to see that Valkyrie’s clearly punishing herself by only having Annabelle bring her out when there’s butt to be kicked. I do think Sliney’s getting better at drawing Valkyrie.

I always find it curious when writers specifically create female villains like Zheng Bao Yu to fight female heroes. We’ll see if she becomes something else besides a bad Asian stereotype.

Nice to see that No-Name of the Brood is a Valkyrie, but with no interest in joining the team.

The Fearless Defenders #9 by Cullen Bunn
Art: Will Sliney

This issue can basically be summed up with: men are the worst. They just can’t handle that women can kick ass and form teams without them. I mean, Hercules is basically always terrible.

Go Annabelle for interrupting Valkyrie making the very bad decision to sleep with Venom. Gross. Of course, I’m not sure how they’ve been redeeming the character in the current books.

I’m not a big fan of these huge, somewhat random fights. Sure, LeFey’s still coming after them, but this seems less of a coordinated attack and pretty random. Plus, shouldn’t all the baddies be female ones? If we’re going to keep up with the trend of the book and Fey’s plans.

Not super seeing how this issue moves our plot forward. Except in that the Defenders are as bad as I am about returning communications.

Go start defending and buy Fearless Defenders Volume 2: The Most Fabulous Fighting Team of All