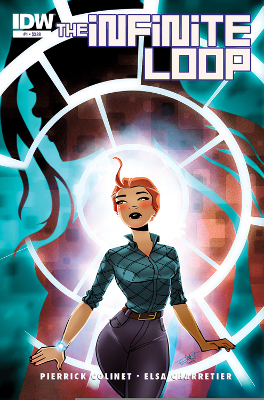 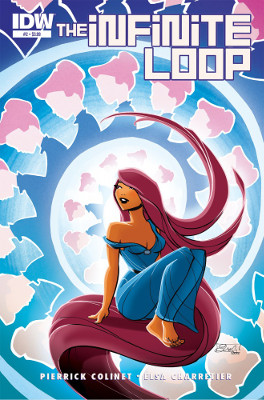 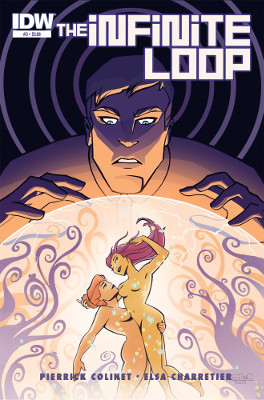 I wasn’t so sure about this comic book. The idea of someone having to save timelines by stopping time terrorists or putting right mistakes in time is pretty overused. And that’s how this book started.

Then there was a dinosaur, and immediately, we got to know why Teddy’s actually cool. And that Colinet was setting a fun tone for this book. (Sometimes nothing is worse than a serious ‘save a timeline’ story.)

Charretier’s art also greatly works to bring this. I love how her art brings clear personalities and distinctions to every character.

Teddy and Ulysses have the best snark and a great working dynamic. Though he doesn’t read signals very well, and she’s trying to avoid letting him say he loves her. That won’t do. And if the last pages say anything, it might not be their immediate future that’s without love and romantic relationships, if may be that Teddy’s just not sexually attracted to men.

The anti-romantic nature of the future and the identification of how romance caused all of history’s problems is incredibly interesting, and it gives this story a strong human connection. More than just fixing history is.

One of the most brilliant aspects of this book is the contrast of the harsh realities of Teddy’s world with Charretier’s bright style. “Suppression” is certainly harsh, harrowing, and subjective. We certain lean that this issue with Noel Spender and Leon Prospekt from Unit 70. They seem to zap everyone and anyone they don’t like into non-existence without a second thought. Like nighttime.

Luckily for Teddy, Ulysses is just a little in love with her, and he isn’t going to give her up until he figures out exactly what’s going on. This could be bad for her if he’s the jealous type.

Ano’s sexual innuendos were a little over-the-top. But they worked pretty well in contrast with Teddy’s complete suppression of her own sexual feelings — see the apartment with everything for one — and Ano’s newness to the world. However, the overall metaphor of the book being really about queer relationships does come off a little heavy-handed. I go back-and-forth from loving it and then wanting Colinet to be a little more subtle and more trusting in his reader’s connections.

Charretier’s expression for Herman’s male gaze was brilliant. And the art continues to be one of my very favorite parts of this book. The last page about Teddy having to save the girl was incredible. Like art on a wall great.

Wow, I was not expecting full-on Teddy and Ano having sex. I’m not complaining about it at all. Just a tad unexpected to see it all.

Charretier’s explanation of how they create forgeries and other anomalies was pretty great. It worked well to give readers more insight into the world. And it also was lovely to show Teddy’s love of Anon. The Frozen reference was cheeky and adorable.

Loved seeing Anon grow into political and social consciousness. She’s not only fighting for her own life, but she’s fighting for her and Teddy’s love. Plus, they found out that anomalies don’t actually destroy the timestream.

I’d guessed the moment Ulysses saw Teddy and Anon’s affection for each other that he’d go ballistic and find Teddy. No one else could.

What I didn’t see was the other version of Teddy coming in to kill Anon herself when Ulysses doesn’t. (Which really if Ulysses had killed her, then Teddy would’ve had to do something about him.) What she can’t do to herself.

It is something of it’s own loop that Teddy or the Teddys are the forgers. That they are the ones who take up arms and the ones that they were fighting against pre-book. Not to mention, they are the ones who created Anon in every universe. This says she can come back, if they stop “suppression” of anything and everything declared distasteful.

I’d rather guess that upper management is yet another version of Teddy.

Fight the future and read The Infinite Loop.