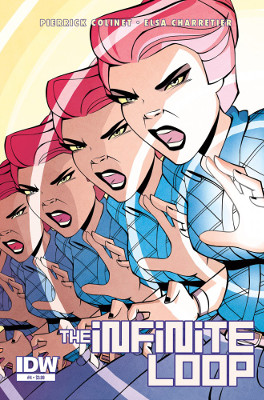 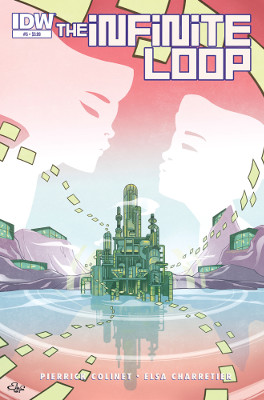 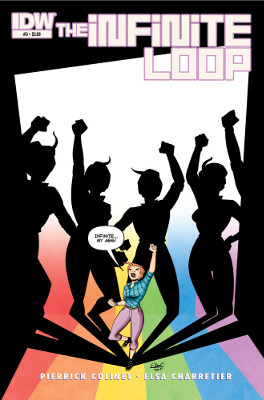 This issue was intense, a bit confusing at times, and very rapid. I felt like I’d dived in at full speed ahead. It was a lot of information to take in as Teddy disrupts the timestream and the other Teddys and Ulysses try to dampen her. And it felt as if it needed to be read in a rapid manner.

The insights Colinet gives us into Teddy about her home life, how her mother raised her, and how it reflects their/our society was fascinating. It’s definitely a totalitarian one. Interesting to see a young Teddy asking questions and reading books, while being urged to believe in their world and play with dolls.

I’m not entirely sure how I feel about Teddy being inspired by the killing of black people in 1964 Mississippi by white supremacists. There’s an unfortunate long history of white people co-opting black culture, pain, and narrative. Even more unfortunately, there’s been a recent string of white comic book creators — Strange Fruit and Marvel’s hip-hop covers — taking black culture and appropriating it for their own art. Not to mention this book literally takes pain from some of the most painful moments in African American history.

I believe, however, this scene was done in a respectful manner. Though I’d love to hear a comic fan/critic of color’s thoughts. Teddy’s own name, taken from the Teddy Girls, addresses white supremacists in queer culture, and the lynching scene also serves to cause Teddy to hide. She knows that being the first one to go against systemic hate can turn into the real deaths of people. History is Teddy’s teacher. (Also interesting to see this lynching scene allowed to continue as part of history when Tina and her crew have eliminated even nighttime in their pursuit of the perfect world. Especially since Tina, a black woman, is seemingly in charge.)

Not sure what I think about Teddy torturing Tina, despite everything. Obviously, we can see how broken she is. The scene where she cries in Ulysses’ arms was well-done. Also how useless the other Teddys were in comforting Teddy Prime was intriguing. They could show her all her memories and their timeline, but ultimately, she only stopped when Tina gave her a way in.

Curious to see that all anomalies are stored in backup. Just in case. Which means Ano can be brought back. All the Anos for all the Teddys.

As this series comes to its end, it’s getting more confusing and coming together less eloquently as I’d hoped. Doesn’t mean it’s still not good, just not as high quality as those first issues.

Charretier’s art continues to be amazing. I loved Tina’s infinite loop glasses. Not to mention Andromeda’s slight gender changes that become dramatic on each end of the spectrum. They are subtle and beautiful as they change genders. And the return of Armless was rad too with Colinet’s snips at Sarah Palin.

Not sure I quite understand about the damaged files and what exactly that means. Especially for recreating some kind of reality. One aspect I enjoy about this book is that is positions nothing being worse than the current infinite loop of reality.

Ulysses continues to be a jerk. I’m not sure the narrative needs him to be so in order to continue the story, especially when the “bad” people are after them. I’m okay with this book being about a message, but Ulysses’ interactions — while sadly way too typical of gender panic — with Andromeda seemed way too preachy.

As much as we’re getting a message here, I do like the social justice activists razzing Teddy about their stories and only serving as symbols in her mission, instead of having their own stories here. Teddy is drawing on all sorts of oppression — oppression that in some cases like Malcolm X is not her own — but in this world is erased. But again, we have history as the teacher and intersectionality as the lesson.

Poor Ano. She’s something of a hopeless fighter when Teddy’s more of the hopeless romantic, so scared that Ano’s going to be entirely broken.

Okay, I feel as though my review is going to be off here as I accidently read this issue before #5. Wow, don’t do that at all. You definitely need the issue before this one to set it up.

Oh, Ano not wanting a life where she cannot touch Teddy properly. Loved her saying she was super turned on when all the Teddys joined in for backup. It was cheeky and fit well with what we’ve seen from her before.

I’m not sure why Teddy continued to think there was more time to plan for Tina and company’s attack. Teddy rather spent that time hiding out earlier. Fighting and possibly losing their love was a great sacrifice and stake for this book.

But happily seeing that there’s a happy ending. Not that I expected any less.

Not sure how, if the Infinite Loop is broken, the other Teddys are still around and active. But you know, it’s great for the theme of teamwork and how we’re all in this together. Especially when they talk about how not just queer people are invested in our rights and it’s bigger than two people’s love.

Buy The Infinite Loop (it’s great!) and support this blog!