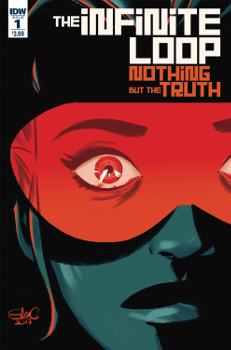 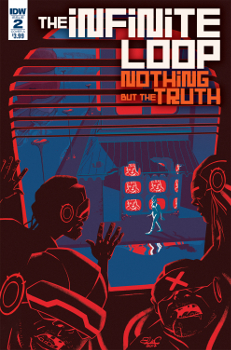 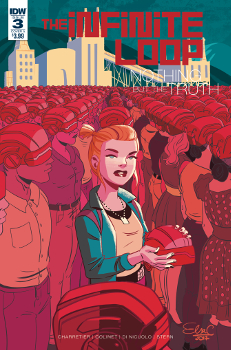 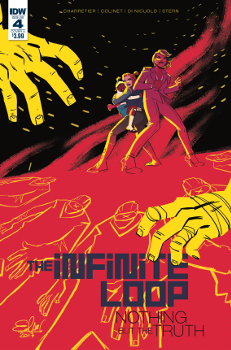 The Infinite Loop: Nothing But the Truth #1 by Pierrick Colinet and Elsa Charretier
Art: Daniele Di Nicuolo

I haven’t quite found the charm in this second version of The Infinite Loop. Perhaps it’s because Charretier isn’t doing the art. (Di Nicuolo is fine.) Perhaps it’s because this assumes we recall and remember a lot from the first series. Which I read and reviewed in the winter of 2015, which was very long ago in how my life has gone.

Teddy seems to have lost a bunch of her confidence. She was always so sure in the past. Her and Anno hurt my head. Though Teddy surprising her for her birthday was sweet, but the vulva cupcakes felt forced.

It’s obvious that there’s a stand-in for opioids here with virtual reality machines. I don’t doubt this will be something in our future, if VR gets really good. Why would you not want to live on the Holodeck? (The question I always wanted to know about Star Trek.)

I don’t normally consume media with addition plotlines. (Well, not quite true as I do watch Elementary.) But I’ve been around enough addicts and lost enough people to their additions that they tap me out emotionally.

The story isn’t bad, but it just lacks the charm for me.

I don’t really see how our two plots will be intersecting. Except that Earth is kind of a shithole — or at least the United States — in both realities with everyone trying to figure out how to forget reality. Anno revealing the reality of what is outside in Washington D.C. was just too real as a metaphor for actual reality.

Which let’s face it, this is comic is struggling to be a metaphor that makes sense.

I’m kind of over the junkie plotline. Especially when we see our good guy, Stephen, just give up. Even though his daughter is there. I also don’t think the bad guy is going to care when he learns about his granddaughter. Like not everyone is redeemable.

I keep wondering where this story’s hooks are. I also don’t really care for the art. Di Nicuolo’s style isn’t a smooth continuation of Charretier’s. Especially when Charretier has such a flare for fashion and design in a way most cartoonist just lack. Which is why I love her illustrations so much.

Unfortunately, The Infinite Loop: Nothing But the Truth has become an example of a comic book where the first volume spoke to current world issues, but did it through some metaphors and sci-fi elements, and the second volume couldn’t figure out how to take a real world issue and make it into a metaphor.

The big difference for me here is that Teddy and Anno are not on the adventure together. Their dynamic is one of my very favorites and a huge part of what made volume one so great. But they are separate with Anno’s plot as a B line.

Which Anno’s plot is stronger because it affects her. We care about them. We do not care about the random people around Teddy who’ve become addicted to VR in the very obvious opioid addiction metaphor. It’s sloppy, and again, with characters we don’t care about. Indeed, Columbia is here to get our sympathies because she’s a child. This is literally the lazy writing of eliciting sympathy by killing or putting in harm a kid or making the kid cry.

I wanted to like this story so much more than I did. The plot didn’t blend together, despite the ending forcing Anno and Teddy to get together again. Like we all knew they would, and we all knew that Anno would keep pushing the world to accept Anomalies.

I didn’t really see Columbia being an Anomaly, and I don’t know if that was because I wasn’t paying attention, or if we were only supposed to see it as a possibility. I guess it makes sense that Stephen would just give up, if he thought she was unreal.

I also don’t really get why everyone wanted Teddy’s watch.

Or how they escaped.

Yeah, I wanted more from this book. Even having Charretier back on the art a bit didn’t make this issue more than two stars for me. Even with the new family structure for Anno, Teddy, and Columbia.