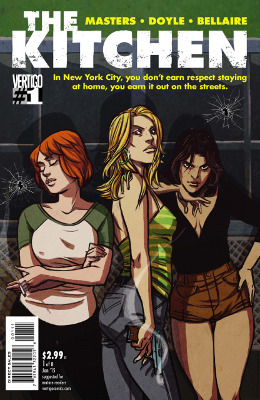 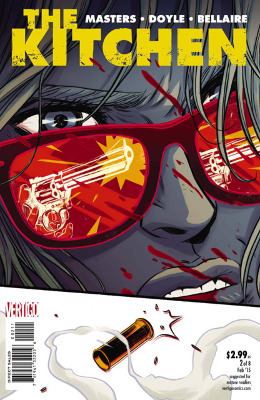 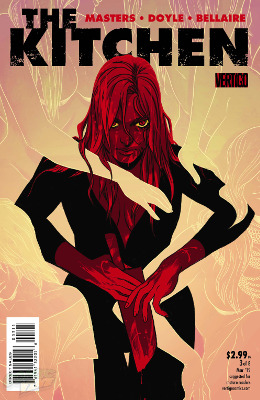 So I get that we have to start somewhere in the tale, but I kind of just wanted to see Kath, Raven, and Angie being mafia thugs. Of course, unfortunately, Kath is the only one getting any actual characterization yet. I hope that the other two women are fleshed out in the next couple issues. That is what will draw me in.

I’m not sure what I think of it being set in the 1970s. It doesn’t quite feel that way yet. Though Doyle’s art is definitely assisting in transforming that. Perhaps that feeling’s just because comic books in general aren’t good with expressing what year action is taking place in. Even though they should be better at it.

I like this issue a lot better, and I dig Angie and her kind of Thelma and Louise choice to kill/maim Nicky Lubretzi. (I don’t think Doyle could’ve drawn Nicky to look more like a sleaze.) And, of course, Tommy shows up right in time to find Nicky’s body. With mass appreciation to Masters for letting them save themselves from the blackmailer.

Given how reluctant Raven was last issue, I was surprised to see just how silent she was this one. I hope we’ll get to know more about her change in attitude.

Often when I’m reading this, I’m pretty sure that I enjoy the concept better than the execution. I think it’s a challenging story to tell. It’s hard to be on the side of characters who are wives of mob bosses. Who know all the secrets and violence and who use it for their own advantage. Who now that they got a taste of having the power, respect, and money all to themselves that they want more of it.

Of course, here we dive into the notion of the woman who has it all. Or as they the women who decide to pattern their behavior after men? Will we be more forgiving of Tommy than Kath? Or will her mother moment with George change our minds? Is that a doorway to humanization and empathy and her womanly role?

I had a lot of hope for this book, but I’m just not feeling it. Or mostly, I’m feeling that Kath, Raven, and Angie will end up very dead and abused by the end of this book.

I also don’t like Tommy being the one to save their butts here and actually kill Nicky. Then show them how to cut up his body in little tiny fish food size pieces to dump in the river. There were definitely some practical lessons about not wanting bodies to float back up.

However, they still needed a man to save them. Then they’ll need someone to keep Jimmy and crew at bay when they get out of jail. Which could be Tony and his mafia, but of course, they’re tied to Frank.

I really want to like this book. And I really do like moments where Kath intervenes with Heather and her pimp, especially since Kath doesn’t judge her, she just wants to stop a woman — a former friend from school — getting hurt.

Follow the women in their journey and buy The Kitchen