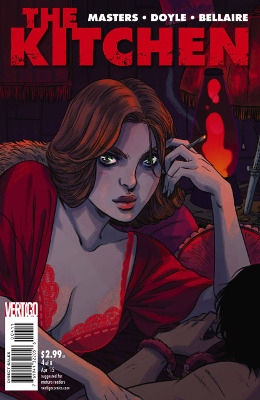 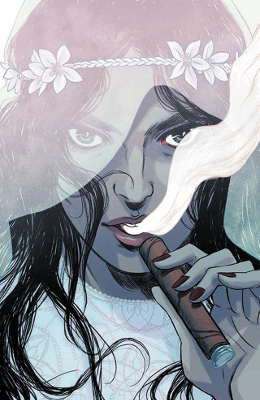 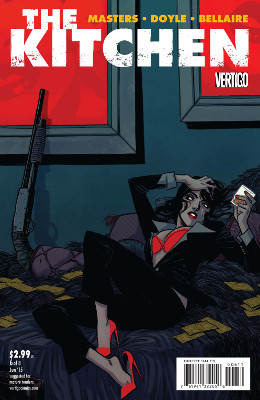 I liked this issue a lot better than the others. It felt like Angie, Kath, and Raven were really trying to have a plan to continue to reign in Hell’s Kitchen and also be in control of their own destiny. While I definitely think more people are going to get dead in this book — and it may be the three of them — it feels less hopeless than before.

I also like that Masters has Tommy telling them — or at least Angie — that they can do it on their own. Angie shooting and killing Herb Temkin tells just how far she’s come. Her story about her and Rob’s romance and who they are as a couple was a nice contrast to her becoming a killer. You understand why she and Rob don’t work; she’d rather that he’d taught her to defend herself than done it for her.

Raven sleeping with Tommy is bound to get her into trouble. But I do like that she was the most uptight, and she’s the one having an affair. Johnny, however, was clearly the husband who hit and pushed her around more than the others were by their husbands. He’s the one they’ll have to kill.

I do think Tommy’s advice about Mr. Gargano is sound. I like how he despises them because they say they’re men of their word, they do the godfather routines, but then they kill each other when it suits their bottom line. Tommy has some weird ethics, but at least he has some.

Oh, Kath probably should’ve killed Jimmy right then and there. Leaving him alive doesn’t seem like a smart move at all.

I want more motivation for Raven to strip aside her Catholic ways and start sleeping with all these guys and love money so much. Even her fight with Angie seems out of the blue. She hasn’t had the character development to really see this turn in her.

Of course, Rob has Tommy beat up and Jimmy goes to make a deal with Mr. Gargano. Unsurprised to see Gargano make a deal with Jimmy that undermines the women. He did, in this issue, use them to fight against another mob crew.

Kath better continue to become a killer. They’re going to need it.

While I like seeing all three women come into their own running the mob, there hasn’t been the character development work that I’d like to see. They have to have some regrets. They have to feel painted into a corner. They have to be worried when they aren’t together and awake. It’s not like they’re dealing with honorable men, only ones who pretend to be.

Much better on the Raven character development right here. I like how she acknowledges that Kath is disturbed by Rob’s head, and how sure she can shoot people she doesn’t know, but they are going to have to kill their husbands.

I do just wish that Masters had the women talking to each other and planning together. Instead, both Tommy and Raven act as their own agents: doing really major plot movements. Raven is right when she says that Tommy just started a war by cutting off Rob’s head.

Of course, Raven’s adding to that when she kills Johnny. Somehow I think it’s going to take all three of them to take out Jimmy. He doesn’t seem like one to go down easily.

Raven did show her hand a little too much to Gargano when she made the deal to kill Tony in exchange for him killing Frankie. That’ll definitely be their downfall.

Take on the mob and buy The Kitchen