Comic book reviews for The Kitchen #7 and The Kitchen #8 by Ollie Masters and Ming Doyle
Average rating: 2/5 stars 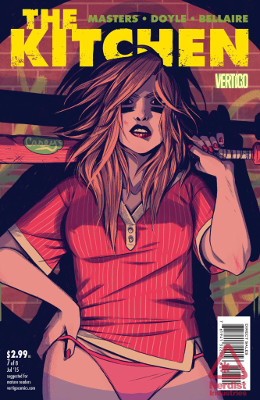 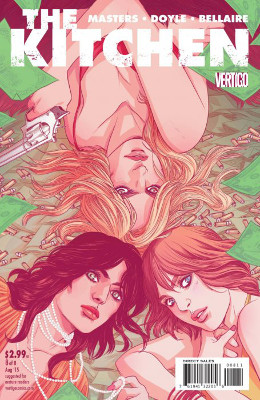 This cover was gross and way more modern in fashion than the inside art. Typically I adore Becky Cloonan’s art, but (I assume) Kath here is too sexy and doesn’t look to be from the era. Thongs weren’t really fully invented until 1974, and they certainly weren’t popular right out of the gate. If Kath was even in different underwear with her thumb on the other side of the strap, it would be more believable.

The penultimate issue isn’t very fulfilling. While it’s completely believable that Jimmy would drag the kids in as leverage against Kath, it puts Kath back in her helpless, pre-series outlook. Where Jimmy has the complete upper-hand.

Well, not complete, as Jimmy doesn’t know anything about Raven’s deal with Gargano.

While I’m glad that Gargano didn’t outright kill Jimmy — that definitely should be Kath and the other ladies’ moves — I wanted a bit more for the wrap up.

Raven’s makeover is interesting, but doesn’t look so great and doesn’t help when Doyle’s art seemed a bit rushed.

I was extremely disappointed in the ending of this series. Obviously, the entire point was how divisive and terrible mobs are — no matter the gender of those running it — and that absolute power corrupts absolutely.

I hate that Raven kills Kath and Angie (and Tommy) kill Raven. Yes, clearly once she killed her husband, Raven changed a lot. The other women had each other’s backs and worse, to them, husbands. That action isolated Raven from the group.

And it wasn’t that I even expected a happy tale from a story about mobsters. These transformations weren’t what I came looking for… And that unfortunately, meant that this book ended on a sour note.