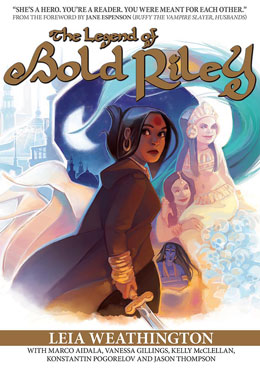 I loved The Legend of Bold Riley. Weathington creates a wonderful new mythology and an entire world. Not to mention the vast majority of the art is gorgeous. I’m a little in love with it, and I hope there are more issues coming out in the future.

I’m a big of this story as a princess turned on her head. Rilavashana SanParite, aka Bold Riley, is the one who wants to go out and explore the world. She’s the one attracting all the ladies of the kingdom. While Bold Riley’s just as brilliant as her brothers, she has no interest in ruling the kingdom like they do. I love that her being the only daughter doesn’t eliminate her for either choices: to rule the land or to go on a fantastic adventure.

Weathington also did a great job at the pacing and placing of the tales. They move the story along so well. Her encounter with the Blue God, Hariivarma, started off the story perfectly. There was expectations that Bold Riley’s quests and her trials associated with them would get harder as she moved along. And I loved how Bold Riley had to use her brains, wits, athletic abilities, and sword in her encounters.

The serpent story was pretty sad. I loved the undercurrent of fluid sexuality in the story, and that both the Miller’s and the Merchant’s Daughter were different in their body types and looks, but Bold Riley liked both of them. The story was a sad one where while both wives got their answers, neither got their husband back in his former glory. And his third wife, the queen, didn’t make it out with her life.

I wasn’t a huge fan of the story about the people of Olin-Tunn and their trickster ghost story ways. Though I do appreciate that Weathington didn’t make every single story super serious. Even if I do like that Bold Riley wasn’t embarrassed about being naked. Just falling for the trick.

The art by Konstantin Pogorelov in “The Wicked Temple” wasn’t my favorite. Maybe the watercolor style just didn’t come across. Or seemed a little bit overboard in the monsoon. Also the evil vipers.

The story of Ghemuen was so sad. So very, very sad. But it serves as a great first relationship for Bold Riley: first relationship with her heart. Weathington’s twists were brilliant to the story. I loved how much more heartbreaking it was when Ghemuen’s killer wasn’t a straight up killer, and Bold Riley’s quest to save her that wasn’t.