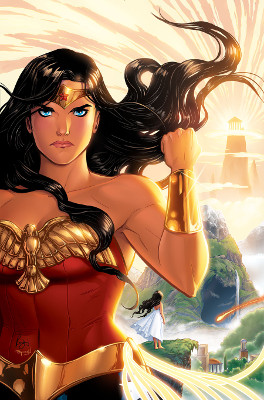 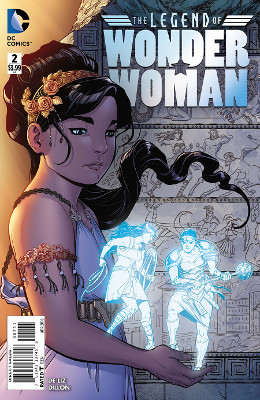 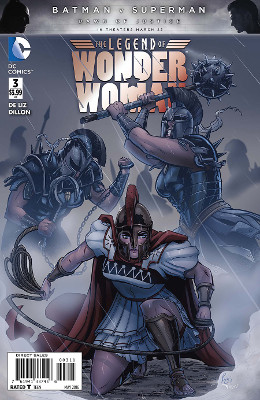 While I’m incredibly relieved to see that Wonder Woman’s returned to her original origins, I’m not in love with this book as much as others seem to be. It’s a decent retelling of her origin, but not different enough to make a memorable, standout retelling.

The art, likewise, is nice. It fits a certain fairy tale and island theme, but it also doesn’t stand out. Also, the yellow-orange lettering is horrible, and I had such a hard time reading it, especially with the glossy paper. Dillon’s Amazons are nicely big and tall women as they should be.

While Hippolyta steering a young Diana away from fighting certainly fits with her origin, however, we see nothing about the Amazons basically rejecting learning to fight. Or stopping Diana. She and all her sisters had to learn how to use those bows and arrows, play bullets and bracelets, etc. somehow.

It’s not as great of a relief from the main book as Sensation Comics was, but I’ll keep enjoying reading this. I’d like to see Diana connect with the girls who are her age more. It would be a nice rounding out of female friendship here.

Apparently, no one can stay away from the idea of having bad Amazons. Those naughty Amazons, they just hate their lives and men so much that they’re evil and will do anything to keep or change Paradise Island. Ugh. I guess I should be more happy that they didn’t outright kill Hippolyta like they did Phillipus/Alcippe. I’m really tired of these books just discounting the power of sisterhood.

I am glad that Diana’s no longer a teen because it would be hard to make her have any authority. Though I am curious about this whole immortality thing, if Diana doesn’t automatically have it.

While the Amazons in any situation have been suspicious of Steve Trevor, they’ve at least not wanted to kill him directly.

This issue took me a good week to read. The editors really need to get De Liz to remove half of the text. It’s so extraneous and not engaging whatsoever.

I will give them points for using Kanga in a way that’s useful. Especially a pet that Diana would use as a young woman. (Though I didn’t see her chatting with Kanga!) Though my joy went to disappointment immediately when Diana and Steve started hunting fish. I get that Steve needs to eat, but again, the whole talking to animals and I’m pretty sure fish count.

If all Hippolyta needed to do was go glowy and godlike for the Amazons to behave, well that was anticlimactic.

I was disappointed that the games only lasted one issue. And that they only covered fighting skills. The traditional stories cover several more skills. Though it’s also unsurprising that Diana wins given how little emphasis the Amazons have put on fighting skills.

And what will Poseidon do with Diana and Steve?