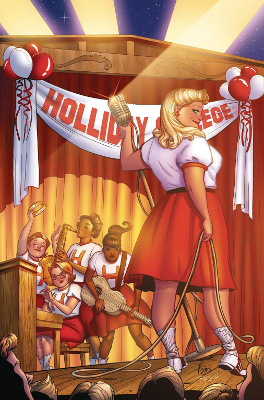 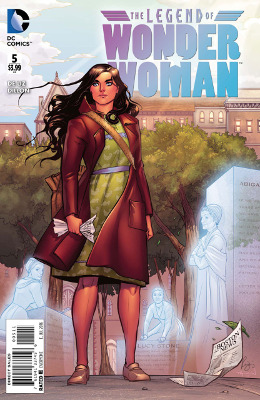 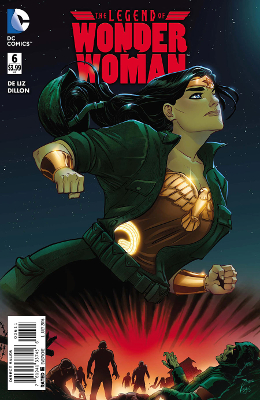 The Legend of Wonder Woman #4 by Renae De Liz

I wasn’t as impressed with De Liz’s retelling of Diana’s life on Themyscira. I’ve read a lot of retellings of her girlhood, and De Liz’s world didn’t pull me in. It didn’t teach me anything new about Diana or the Amazons. It doesn’t help that I recently saw the Wonder Woman film, and I wanted so much more time on Themyscira than those opening 20 minutes or so.

However, this issue, taking place in man’s world, was about 45 times better. De Liz shines with Etta Candy. Of course, Etta is probably one of the very best characters ever invented.

First, Diana washes up ashore outside of Boston. She’s taken in by an older woman and her husband, who’s a fisherman. They live in a modest cabin. The woman feeds Diana her peach cobbler. She also gives Diana, as a parting gift, the American flag she made for her grandson, who died in the war. The issue kind of lends itself to letting you believe this grandson was as brave as Steve Trevor. Diana, at least, mingles her grief about her home and Steve together.

I assume all Etta’s talk about boys and rejecting all of them has to do with her being super queer. Especially since she meets a basically mute female stranger, in Greek dress, at a May queen contest and college party; said stranger saves some drunk dude in an amazing athletic feat; and Etta pretends to be her cousin and takes Diana home. Diana then stays there for 2 weeks, saying almost nothing and sleeping on Etta’s couch. Let’s just say Etta must have a huge crush on Diana.

I love this reimagined version of Etta who’s rejecting her family in order to live life on her own terms. Though I did want to see the photo ad of Etta.

More Etta all the time. I love that every single version of Etta seems to want to have makeover time with Diana.

The Legend of Wonder Woman #5 by Renae De Liz

Apparently, Etta Candy was just what this book needed. A little humor in face of all the seriousness. I do hope De Liz finds Diana’s humor too. She has it. It’s there. Even if she’s a bit traumatized now.

First, the chicken print dress, I love it. The neckline was a bit much, but otherwise, it was adorable. Etta was wrong about it not being dressy enough. It wasn’t like they were going out on a date or a double date.

Yay for Steve being alive. I should’ve figured that his memory of Themyscira would be wiped. But it’s nice for Diana’s trauma to not involve thinking she’s the reason Steve is dead.

As much as Etta seems ridiculous for being upset that her family put her face in the hair removal ad, she is right that those things ruin and setback careers. I remember hearing a now famous actor talking about how her career was setback by like 5 years when she did a tampon commercial. At the time, she needed the money, but then no one wanted to hire her because of it.

Diana freaking out in the movie theater was great. Though I expected more little moments like that and her getting upset they wouldn’t let her join the military. (She’d probably kick all their asses.) I did like her getting super pissed off about A Midsummer Night’s Dream and its non-realism.

I’m not sure Pamela Smuthers is needed as a foil for Etta. Etta has her own worries and can hold herself back without Pamela’s help.

The Legend of Wonder Woman #6 by Renae De Liz

Is Etta Candy too much? This is what I walked away from this issue feeling, when in all the issues since Diana met Etta, I’ve been very much pro-Etta’s voice and am a general Etta Candy fan.

The reason Etta comes off as too much in this issue is because De Liz straight up does not know how to write action sequences. The most powerful scenes should be the ones where Diana’s on the front lines. Where she’s taking on the Duke of Deception and saving the Allie soldiers.

Instead, the panels are unbalanced with pulled back views. De Liz shies away from displaying any violence. Even half-dead soldiers looked like they’ve just been roughed up or maybe had a light wrestle in the pea patch.

In the next issue, I can only hope, with Etta’s makeover, we will see Wonder Woman with confidence.

Also, as much as Etta is too much, because she is all the emotion and all the action in this issue, there is no person happier on the face of this planet than Etta Candy giving someone a makeover. I do love the touch of Etta being designer and her designing Diana’s costume, not just happening to have something that works in her closet like in other Wonder Woman stories.