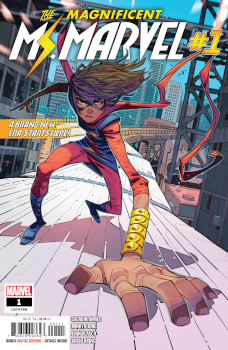 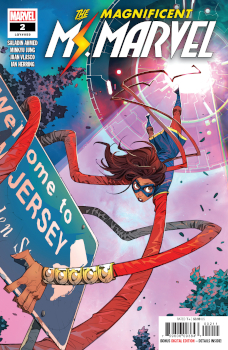 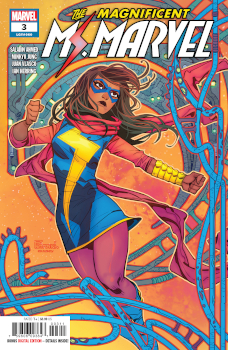 The story framing of this interests me, and I wonder how long it will go on and how it will ultimately tie back into the main story. I can’t imagine it will go on forever.

I adored Kamala’s juice with Nakia in showing their friendship, but also the easy way to explain to perhaps a new audience how Ms. Marvel got her powers. It also establishes, for us continuing readers, that Ahmed will be keeping Kamala’s friends, family, and the general cast of Jersey City.

Oh, Bruno wanting to talk about their kiss, but also Kamala has to fight baddies. Ones that keep turning into slime puddles.

I suppose it is inevitable that Kamala’s mom would tell her father about Kamala being Ms. Marvel. They generally have a good marriage, and that’s a pretty significant secret to keep. However, something else is clearly going on here, besides the goo move at the end.

The ending scene with Kamala’s parents turning into goo was an excellent move emotionally. We understand how she loves her family, and it makes a good fake-out for whatever else is happening with her parents (likely to her dad).

Jung’s pencils were a nice continuation of the contemporary feel of this book. The style works for Kamala’s world and her age.

Ahmed uses the narrator technique here again. However, this time, it’s Bruno narrating the story and talking about how much he loves his best friend. While we know Bruno is romantically interested in Kamala, his love is also a love of a friend and trusted ally. It was a nice contrast to the emotions Kamala feels as she desperately hunts for her parents. Kamala feels terrible about herself, and her perceived inability to keep her parents safe.

I, for one, was glad that Ahmed wrapped up Kamala’s missing parents in one issue. My heart couldn’t take much more of it, and I cannot see Kamala being able to either. Of course, this leaves the question of if her father knew that she’s Ms. Marvel before that moment.

Jung’s pencils, Vlasco’s inks, and Herring’s color were beautiful tone setters here. It’s a dark day in Jersey City when Kamala cannot find her family, and the art reflects this. When she fights the hydra monster, the shading is incredible.

Them running into Josh was interesting. Kamala and Bruno have given Josh many chances, and he continues to make bad choices. But they also do not have time to deal with him — they have a more critical crusade — so I’m sure this will come back to bite them.

I do hope the next issue features some resolution with Kamala’s parents. I still think something’s going on with her father. And these aliens cannot just take Kamala to their world without that resolution. Though Kamala on another planet would set up a whole new paradigm for Ahmed to write.

I adore that Kamala goes into space, and she takes her parents with her.

That said, I did have somewhat of a hard time following this story. Kamala is impulsive as the aliens who just zipped her over to their planet. (And one of them had to die to make the technology work!) Yes, they are full of red flags. However, it seems like Kamala should’ve done some investigating and thinking before action.

I did love that Kamala gave her parents the big bed and the big room. She’s such a good daughter.

So Kamala figures these aliens aren’t giving her the entire truth, and she finds them torturing Cheb, who they’ve blamed for the falling of a pillar. If anything, he’s certainly part of a rebel group against the government. Kamala knows torture never works and only bad people torture, so she immediately rescues Cheb and they all escape. Again, I feel like I’m missing something here.

This cliffhanger was a non-hanger. I don’t believe for a second that Kamala, her parents, or Cheb died as we straight up wouldn’t have a book. Plus, Ahmed isn’t going to harm Yusuf and Muneeba.