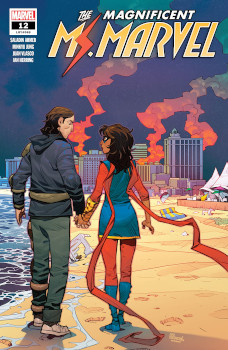 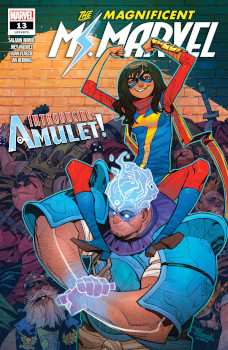 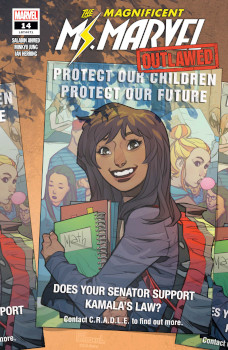 I’m really uncomfortable with the idea that Yusuf is now permanently disabled because Kamala had to stop her sentient suit Stormcharger from killing Josh. It uses disability — of another character she loves — to show the hard choices Kamala must make as a superhero. This is Kamala’s sacrifice, yet she is not the one directly impacted.

Why couldn’t Kamala phone the other Avengers? Especially since we just saw Tony, who probably isn’t doing anything but getting himself into trouble.

This distracted me from being able to enjoy Kamala and Bruno together. Interestingly, it’s Kamala who wants to hide their relationship, at the moment, from the others. Not Bruno. Which means maybe his talk with Aamir wasn’t as terrible or affecting as I assumed.

I think this is the first time Kamala might’ve actually died without Bruno saving her. I also don’t have great feelings about that. Kamala felt damseled.

I’m glad that we’re onto a new plot. Stormcharger is taken care of, and this is nice. But I do like Kamala feeling that perhaps she’d started relying on the extra power in her fighting and finds herself more tired than she expected.

Vazquez’s pencils are pretty good so far. I enjoyed Amulet’s design, and I’m curious to see how Vazquez’s take on Kamala and her world evolves. Kamala looks a bit softer here.

Ahmed’s approach on how Kamala feels about her father and his disability and how she blames herself works a bit better here. Especially since we see Yusuf living his life again and more joyous about that than Kamala is.

Bruno and Kamala’s relationship is still in an uncomfortable position for me. I don’t understand why Kamala wants to hide it from their friends. Her relationship has already changed forever with Bruno. There’s nothing she can do to stop that by not telling their friends. Plus, Bruno seemed to overreact at the fair greatly.

The sham fortune teller was a great gag on the dangers of cultural appropriation. Amulet seems fun. However, I do not want a love triangle between him, Kamala, and Bruno. We already did this.

So I’m supposed to be reading several other books? Yeah, I do not like this. I’m happy to see that Kamala’s getting a higher profile — and I’m excited about her Marvel Studios TV show — but I find it extra annoying to have books so closely cross over with each other.

I won’t be picking up any extra titles.

The flashback-style nightmares didn’t add a lot to what we already know about Kamala. Or about her current struggles. Yes, we know she has a bunch of angst right now over Bruno. Sure, he’s been her best friend forever, but they’ve both had a crush on each other for a long while now.

This ban on teen superheroes is a plot that gets recycled in Marvel at large every 10 years. It’s tired. Though this twist of the law being named after Kamala — especially since her parents no longer know she’s a superhero (which I guess that plot I disliked, I can now blame on Marvel editorial) — is the very the United States.