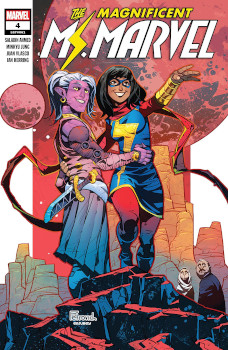 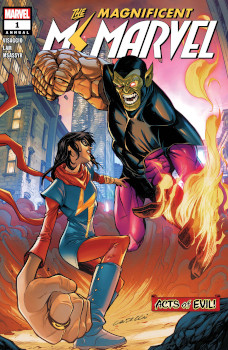 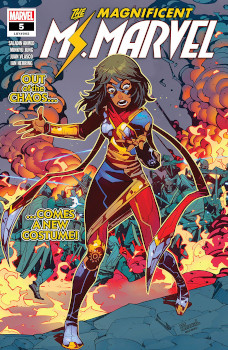 This issue is still all over the place. There are some hints at what might be happening, but I’m not fully convinced that the Beast Legions aren’t something created by the royals. If they are everything Cheb said they were.

I still don’t know about Cheb. Or him trying to flirt with Kamala. Only a royal would have that much ego to try to pick up the Chosen One character.

Ahmed’s imagination about how the royals would frivolously spend money to scent the royal palace was perfect. It reminded me of reading about the tunnels for Empress Eugénie de Montijo’s dresses. There were so many places to hide.

I’m glad we get a little flashback to something happening with Yusuf. There were hints earlier, but I like that Kamala knows something is up. I want us to have a tiny slowdown to work through these things. The previous issues have been pretty jam-packed with action, and Kamala and her family have some processing to do together.

This takes place outside of the regular Magnificent Ms. Marvel continuity. Here Kamala’s in Jersey City and fights Kl’rt, who’s posing as Captain Hero. Props to Visaggio for her selection of the worst superhero name ever that made this book funnier.

In typically Skrull fashion, Kl’rt wants to destroy Earth. The twist here is that he’s going to use Kamala’s DNA and Earth’s mass and essence to rebuild the Skrull throne-world. I haven’t been following the major titles for a long while now, and I’m not sure if the destroyed homeworld is supposed to bring the comics closer to the MCU.

(Skrulls famously bore me because there’s only so many plots you can do with them. Or seemingly so many scenarios that Marvel writers want to use them for.) I don’t really understand why the Emperor would be Skrull on this mission. Yes, Kl’rt has powers and has fought on Earth before, but doesn’t he have underlings to do the dirty work.

Shabang was a fun character. However, Kamala says something about Shabang wearing a tutu over her outfit, but she’s not. So I’m not sure where the art disconnect came, but since I love fashion in comics and I noticed it.

I also appreciated the contrast between the two villains. Shabang reminds me of the scene in Buffy the Vampire Slayer: where the vampire Spike talks about how much he loves the world and infamous refers to people as Happy Meals on legs and how he’ll help Buffy stop the incoming apocalypse because he knows it will negatively affect him. Shabang wants to keep Earth around.

Ultimately, I did love Kamala’s speech at the end, where she convinces Kl’rt that the future is something new and something that can bring all people forward. This is also a lovely homage from Visaggio to the work G. Willow Wilson did in writing Kamala. She may be able to embiggen her fist, but that’s not her only weapon.

The framing of the story — like we saw in issue #1 — is back. In this case, I believe it’s supposed to signal that everything on Saffa turns out alright. Ms. Marvel does save the day and the planet.

But the chaos of this story was a bit much. I am tired for Kamala, and I am glad she’s back at home.

The attack from the Beast Legions was short. It seemed pointless, except to fulfill the prophecy, stop the in-fighting, and allow Cheb to become the new leader. To me, Kamala always seems like one of those heroes who end up asking questions. She may punch first if she feels she’s going to get hit, but Kamala isn’t as reactionary as Captain Marvel, and she isn’t as seeking of another option as Squirrel Girl. However, you think she’d be more curious about the Beast Legions and who is controlling them, not just take an ancient prophecy and a Kree hologram of the original Chosen One at its word.

Kamala’s new superhero costume looks cute. But it also looks much harder to draw than the one she wears now. Except for 1,000 individual pouches, typically, if a costume is too complicated, artists end up toning it down or going back to the original. I like that it turns into a handy bag. (Though can you put anything into that bag? And what happens to the stuff when the costume’s on your body?)

I have mixed feelings about Kamala’s parents forgetting entirely about the space trip. This seemed to be the request from Cheb to the elder. I liked her parents seeing her differently, and I liked her father knowing about her superhero life. (Also, Kamala needs to call Bruno and tell him she’s back.)

Yusuf having an incurable illness was something I called in the first issue. Good thing Kamala knows lots of smart people and has connections to other medicines.