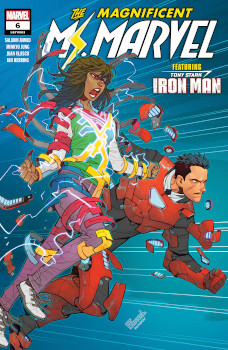 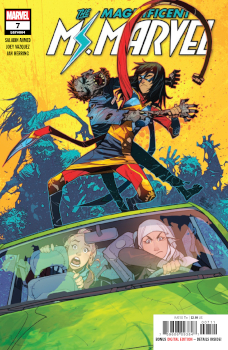 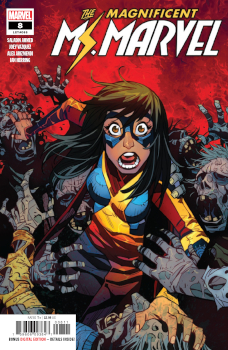 It seems like Deathbringer needs to fight someone whose powers depend on the sunshine. That would make a much better foe. But a school bus full of children is classic Ms. Marvel.

Finally, Kamala gets the full story about her father. As much as I don’t want anything to ever happen to Yusuf, I did like how Ahmed wrote Kamala’s reaction. Especially her telling her friends and then calling Tony Stark. There may not be a cure for whatever condition Yusuf has, but Stark would be the best person to call. Kamala also might send out a signal to the Inhumans, or anyone else she knows with access to advanced medical technology.

I’m still not a fan of Kamala’s parents having their memories of their time in space erased. Kamala seemed rightly pissed about it, and also to understand how greatly it affects her relationship with them. It was a lovely step in deepening their respect for her as an adult, and I’m surprised Ahmed would erase the work he put into that. Which honestly was my favorite part about the entire space arc and certainly the pay off emotionally.

The part of this story that I’m feeling the best about is Kalama’s family and friends interactions. Ahmed hits the right note with how overwhelmed caretakers can get, and also how Kamala and her family are doing their best not to reflect that back on her dad.

I’m always a fan of friend road trips. Falafels are very important, and I’ve been known to chase impossible to get food. It was fun to see how the three young women’s friendships have grown and how supportive they are of each other.

Oh, Josh and Becky, they never get it. I assume they are villains for hire these days, and it’s just a bonus for them that Kamala showed up on the scene.

I’m glad we didn’t stay any longer with Josh, Becky, and Rubicon. “Uncle Brett” was a hilarious version of Steve Jobs and every single startup tech white guy you’ve met with just enough charisma to trap your soul. I was glad Ms. Marvel didn’t get stuck inside him. Ewww. I grossed myself out typing that.

By the last part of this, I guess maybe Josh and Becky will be back. Or at least Ahmed’s leaving that avenue open for himself and other future Ms. Marvel writers.

Not sure if it’s the change in artist, but why does Kamala’s new costume have a lighter color right over her boobs? When Jung launched this new version, I expressed concern about how a more complex costume would translate and how tedious artists would find it to draw over and over again. Especially since, in superhero books, the hero often spends most of the issue in their costume. Apparently, under Vazquez and Arizmendi, there’s a lighter color right over boobs. This makes me very unhappy as it just does not fit with Kamala’s aesthetic. She may have decided not to wear a hijab, but she does dress in a more modest nature and famously made her very first costume from her burkini.

That said, given that ending scene, Kamala may not be wearing that costume for much longer.

I do hope Zoe’s car makes it back to Jersey City.