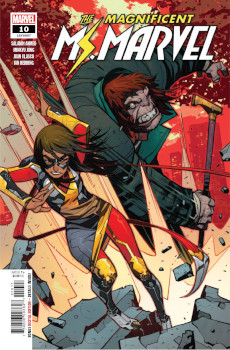 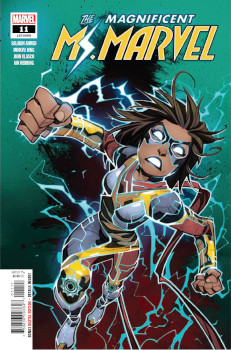 I called it. Ms. Marvel’s new costume has been simplified. It’s still pretty complex, but at least those boob highlights were removed in the design. I actually find the simplified version much more stylish than the original new design.

Yay for Kamala and Bruno kissing. Finally. It took those kids long enough to get it together. Of course, it’s just in time for Doctor Strange and Iron Man to show up.

I don’t know how Doctor Strange can concentrate on Yusuf’s surgery and telepathically yell at Kamala. I get the metaphor of having Hyde attack the hospital. However, it just didn’t have the emotional resonance I was expecting. It became clear perhaps too quickly that Yusuf would survive this mysterious illness and that they’d make it related to the Inhuman DNA he carries, so the illness didn’t have to be tied to any disease in the real world.

You know what I really don’t like: men telling women in their family who they can date and who they cannot date. If what I’m seeing is that Aamir threatened or told Bruno that he’s not allowed to date Kamala, I’m going to get very pissy. Women aren’t owned by their male family members. They aren’t to be bought, sold, passed on, or given with permission.

Hyde remains boring. I called it many issues ago that the suit would end up having a mind of its own. Yeah, not shocking that it wants to kill Hyde. I mean, who doesn’t. Since Hyde is really about toxic masculinity, it seems like there’s some missing metaphor that Ahmed could’ve planted here.

I do like the art team’s take on the evil costume. It’s perfectly sinister.

This is still not completely drawing me in. Honestly, I want to see Kamala back with her family. I get that her father will be fine in the end. But especially since her parents’ memories were erased — how will they ever understand how she needed to leave them during an emergency to attend a superhero matter.

Kamala embiggening her face was hilarious. Also, frightening. I loved how those young women gave her their scarf and sunglasses. It’s the kind of community spirit that centers Ms. Marvel tales.

Oh, Bruno, I’m just glad he didn’t spontaneously tell Kamala that they cannot be together after his talk with her brother. If he goes that direction, he knows to wait for when she’s not fighting.

Of course, the costume has been keeping track of all the villains they’ve been fighting, and also making decisions about whether or not those villains were properly taken care of. In many ways, Josh and Becky are the two who elude Kamala the most because they are the most human. They are her Harry (Spider-Man’s friend turned enemy), and add to the classic comic feel of this book.