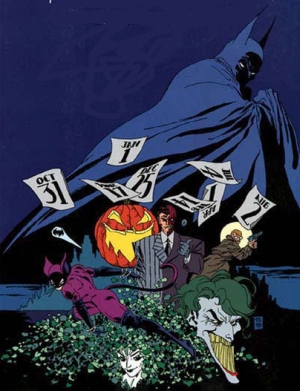 The Long Halloween by Jeph Loeb and Tim Sale is a noir murder mystery. The best Batman tales are always who-done-its. Batman is, of course, the World’s Greatest Detective. The Long Halloween is considered one of the must-reads in the Bat-genre. In fact, some of the lines were lifted straight from the comic and into the blockbuster-hit The Dark Knight.

My favorite aspect of the story is how it looks at Batman as the cause of the rise of “freaks” in Gotham. Has Batman created the perfect environment for those like the Joker and Two-Face to not only survive, but thrive?

In some cases, Batman helped “create” the villain, albeit often indirectly. With a focus on the origins of Two-Face, Loeb exploits this. Had Jim Gordon, Harvey Dent, and Batman not made their pact on the roof to bring down Carmine “The Roman” Falcone, Vincent “Boss” Maroni wouldn’t have necessarily been on the stand and thrown acid into Dent’s face, creating Two-Face. While not in Loeb’s version, some writers even go so far as to have Batman knock the acid from Maroni’s hand, keeping the acid from destroying Dent’s entire face. (Loeb wisely chose not to explain how Batman could get into the court undetected without being arrested. Specifically in a highly guarded and publicized mob trial.)

This theme of Batman nurturing Gotham’s villains plays nicely into the non-reveal of the Holiday killer. Alberto Falcone might’ve confessed and wanted his father’s love and the fame, but Two-Face said there were two Holiday killers. Gilda Dent, Harvey’s wife, has her private confession at the end. But Two-Face was also Holiday in that he kills Falcone and Vernon. Not to mention, the appearance of other members of Batman’s rogue’s gallery and who they could’ve killed.

There are many things that don’t add up, including: Gilda being injured and in the hospital, due to a bomb, during the early killings; Alberto had no reason to kill his family’s henchmen (again, early killings); and Harvey would’ve made sure that Alberto was actually dead. Then there’s Catwoman, always there and always disappearing, whose real motives are revealed in Catwoman: When In Rome. (Which is a better text, in my opinion.)

Never finding out who the killer is is a let down for the noir-genre. Additionally, it is rather confounding considering that both Batman and Commissioner Gordon seem satisfied to carry on keeping Gotham safe now that Two-Face and Alberto (Holiday) are in Arkham Asylum. Batman never catches the real killer or knows, for sure, who the real killer is. He seems okay with this. In fact, I don’t buy that Loeb does have a real killer in mind.

While it’s smart to question Batman’s involvement in creating monsters, Batman himself doesn’t grow or actually seem to question his actions. It’s actually more of a revelation that he doesn’t care. In many ways, his not caring is presented as genetic. Genetics because his father, a doctor, saved a young Falcone and, thus, helped the mob he so hated grow, which led to his random mugging and death. Batman, like his father, can’t control or really see the bigger picture. Loeb shows a Batman/Bruce Wayne who’s focus is only on the villain, only on the symptom, instead of the problem’s root.

I just like to think of a Batman who’s smarter than that. I think that’s what I like about The Dark Knight, I like seeing a Bruce Wayne, who’s ready to hang up the Batsuit, because he believes in Harvey Dent. Loeb’s Batman just fights the villain every week and puts him/her away in Arkham and does it all over again when the villain inevitably gets out. This doesn’t make Gotham any better. Which is what I’ve always thought Batman was trying to do.