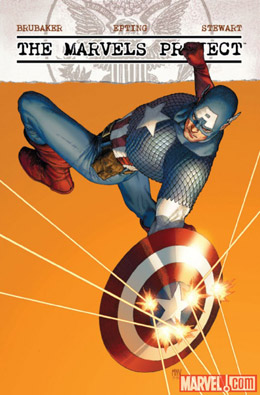 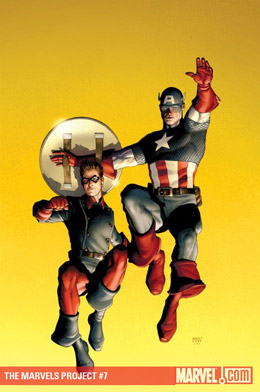 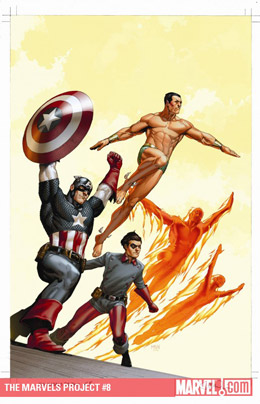 The Marvels Project #6 by Ed Brubaker

I really loved this initial meeting of the Human Torch and Toro. Great to see it come out of the Human Torch seeking more information on himself. Not because he had a feeling about Toro. One thing Brubaker’s been doing really well, along with Epting’s pencils, is bringing out the fear of the unknown in the reactions of the people to superhumans. Even the Human Torch flies away in fear of Toro. (And shame too.)

Namor and the Human Torch’s epic fight plays well when we get to see the other masks — the probably non-super powered ones — helping the human population escape from Namor’s flood waters. I love how epic Epting’s pencils are when the Human Torch, Namor, and Captain America come together for the very first time.

The Marvels Project #7 by Ed Brubaker

This book almost seems too easy for a World War II book. The bit with Union Jack’s Nazi detention camp origins highlighted some of the horrors; however, it feels like such a polished book.

Epting’s epic layouts are part of the problem. They have beautiful detail, but they’re not gritty details. Dave Stewart’s colors are excellent here and I think almost give the book more of a horror tone than the pencils. Stewart’s colors are key here in that Captain America’s bright flag costume and the red of the Nazis is not only the brightest, but the only non-sepia tones.

But yeah, this isn’t a book about World War II. It’s a book about the era and the coming of the Marvels. It’s about the hope of Captain America, the Torch, Bucky, Toro, Namor, and Union Jack.

Bucky doesn’t look quite as young here as he’s supposed to be in the text. However, he’s just as ernest and sneaky. It still amazes me how many young soldiers went to war.

I found the part about the Atlantean Nazis really interesting. I’m not sure if they were in the original World War II comics as the bargaining chip to have Namor join the Allies.

The Marvels Project #8 by Ed Brubaker

The beginning of the United States’ official involvement in World War II is a good place for Brubaker to end this limited series. While I think Brubaker does a fine job at crafting the story, as it went on, I became less and less enamored with the story. Perhaps I don’t have the same nostalgia for the era. Or perhaps I’ve read too many of these tales of the Marvelverse already. Or perhaps, I just got tired of a bunch of a white guys.

I do think what Brubaker does masterfully in this story is tell a soldier’s story. Here we have a battle on two fronts: one is Pearl Harbor and the other is a secret fight pitting Captain America, Bucky, and Namor against Axis-aligned Atlantean foes.

Pearl Habor stays the tragedy it is in history. Both the Human Torch and Toro attempt to stop as many Japanese planes as possible. While they stop some, they cannot stop them all. The Human Torch laments that Toro must witness the horrors that humanity does to its own. Which is a nice foreshadowing to the many more horrors of World War II they will witness.

Pearl Habor’s contrasted with Captain America’s hero battle. The good guys win. Evil is defeated. This is the type of story we’re accustomed to. The heroes coming out as winners in the end. Because the stories of superheroes told about World War II are more fluffy than actual wartime.

Brubaker does a good job at wrapping things up, but like I mentioned earlier, I think my attention was just lost here.