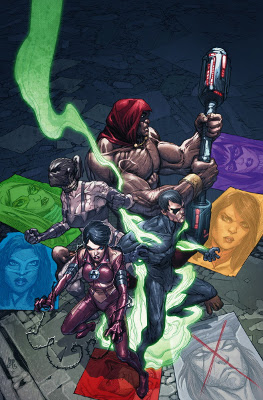 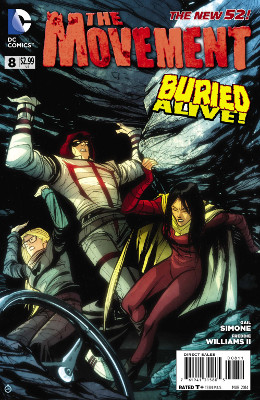 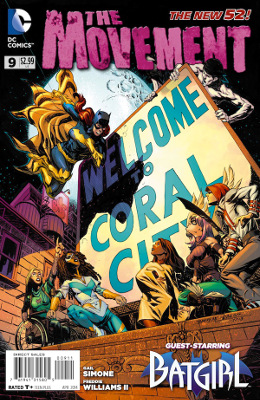 So my biggest issue with this is Monster Baby’s and Anguish’s outfits. I feel that they can be ridiculous (like the characters) without being swimsuits. I don’t really understand how our heroes can be fully costumed, but the villains can’t. I just expect more from Williams, especially being teamed up with Simone. (Of course, Ed Benes working with Simone also didn’t make a lot of sense.)

I’m pulling for Mouse. I thought it was cute that they warned the doctors and nurses to expect thousands of rodents.

Surprised that Virtue didn’t send Tremor and Katharsis back to base immediately. Sure, she had to stick around to see if Meers meant what he said about not arresting Mouse on sight. I like that he gave her information about the shadow government.

Poor Burden, he’s going to have to accept himself. I assume that he’s some kind of shapeshifter with maybe some super strength and flight tied in.

I appreciated how this book showed off the Movements’ team dynamics and how they can work together. Or in some cases, how they don’t work together very well.

I’m super interested in learning more about Burden’s actual powers. It seems to me that there’s some strength in the mix besides shapeshifting. Or perhaps it’s some kind of projection of what he believes himself to be.

Also interested in Virtue’s powers. Besides emotions, she’s clearly got some other stuff going on. Not to mention the mystery of why Erik Yee said she was dead.

Mouse wanting to marry Tremor is pretty ridiculous. But good to see that he heals quickly. Also pretty funny that he considers hospitals dirty.

Somehow I don’t think this is the last we’ll see of Joe Whitt. He’s probably going to go work for our baddie.

Surprised to see that Simone is bringing Batgirl in. Well, she does like to have her crossovers with the books she’s writing.

Finally, I’m a huge fan of Rainmaker and Virtue dating.

So freaking bummed that this book is getting cancelled at #12. 🙁 I loved to finally read a comic book from a mainstream publisher that reflects what the real world looks like and addresses current concerns about our world. I’d really hoped for a lot more stories exploring these characters. Sadly, it seems that a lot of Simone’s really magical characters created (or intensely sculpted) by her seem to get lost in the archives.

I liked that Horizon pitted Batgirl against Virtue and company. And I like that it shows more about the Movement that they’re going to grant some kind of “intent of good spirit” for those who seek refuge in their part of Coral City. That said, they didn’t even talk to Horizon, so I find it less believable that Virtue wouldn’t stop for a moment and suggest to at least get to know another power moving into their territory. Especially since they were not keen on Batgirl.

You know, Simone’s been threatening to unmask Batgirl a lot these days. Wonder if she’s actually going to go through with it in the next issue?

I like the setup of Horizon clearly not being such a great guy and having no problems frying anyone to death who gets in his way. Certainly makes the situation more complex for everyone. Considering what do you do with a bad guy when you don’t trust or want police involvement?

What Virtue knows about Meers just got way more complex with the reveal that he shot and killed her father. I bet those seizures she had as a child were her powers manifesting themselves.