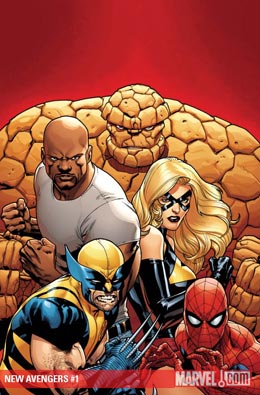 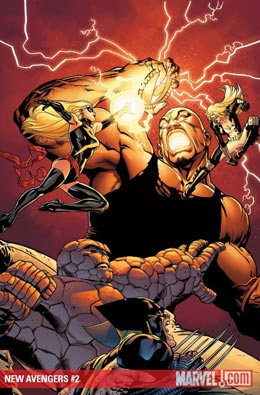 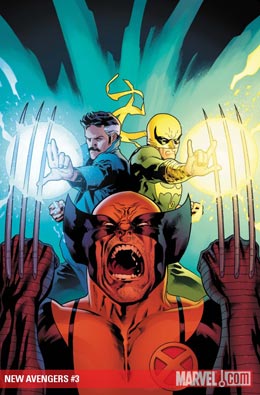 I still don’t get why they relaunched this title. Except knowing that fans always buy #1 because they think it’s going to be worth something some day. Yeah, keep trying there, fans.

I liked about half this comic book. Luke lining up the team was my favorite half. The whole Daimon Hellstrom and Doctor Strange as zombies and going after Brother Voodoo was the part I didn’t like.

Luke’s pride played in great with not wanting to accept handouts from Steve and also not wanting to be under some registration. I love that Luke borrowed cash from Danny. Danny who somehow pulled it out of his crotch in his Iron Fist green onesie. Also they’re totally married, and Jessica’s completely understands their true love.

Victoria Hand is a welcome addition to the team. I’m glad to see Bendis not toss her out with the regime change. I think she makes a good foil for the superheroes. Victoria has vision and plans that the typical superhero who’s concerned about saving kittens up trees doesn’t. She watches the bigger picture. Sure, they take down big villains, but they don’t think about the future. I hope that Victoria will fit nicely into the team. Especially if she’s pinned nose-to-nose with Jessica.

Likewise, I enjoyed the roundtable. Those Wolverine is in 12 places at once joke will never not be funny. The “family time” is what I enjoy about Bendis’ team comics. I’m one of those who doesn’t get upset when his dialog gets really Bendian.

The Doctor Strange portion was what I didn’t enjoy. I didn’t really follow what was happening, and I felt like if Bendis was trying to set up a mystery, he was annoying me instead of intriguing me. I like Brother Voodoo more than Daimon and Doctor Strange. But the plot just didn’t hold me. And there’s no reason why the Eye of Agamotto ended up in Luke’s hand.

I really don’t think the New Avengers need the Thing on their team. I mean, if you need heavy-hitters, you already have Jessica Jones, Ms. Marvel, and Luke Cage. Do we need a fourth smash-and-bash? Of course, having a Jewish person does add to the diversity quota. Now all we need is Carol to finally confess her love for Jessica Drew. Then Bendis can call it “The Newer Diverse Avengers.”

Anyway, back to the story… I love Jessica Jones in this. Because she gets involved when Luke is involved. However, I do question the sanity of handing Danielle over to Spider-Man. I mean, look how often has his not-real daughter’s series got canceled?

I don’t think I’m very enamored with the story in general, but I do like all the character bits and side-parts.

Unfortunately, I just don’t think Bendis’ writing style is always suited for team books, especially when it comes to plot. He’s much better there on single character titles. But his group dynamics, where they all sit around eating breakfast together, those are my favorite bits of his team books, and The New Avengers #2 certainly has those.

The best of this comic was Victoria Hand. I loved her and her big gun coming to save the New Avengers. This seems very in key with Victoria’s character. She was the only one who could effectively take down the energy demon things. Which I don’t think are demons, but are angels. Not very creative, in my opinion.

Unfortunately, while I’m normally a huge fan of Immonen’s art, I didn’t really care for his take on Victoria. She seems almost too soft. Too many round corners on her.

The fighting seemed a little duller here than in the past two issues. Maybe I’m just not a fan of the Thing and Spider-Man snarking back and forth. Neither character is a favorites of mine, and together, they just seem like one-line quip over-kills.

As much as I’m glad Danny’s not dead and that they’re using him in a plotline, I’m once again not enamored by this sorcerer plot. I hope that Doctor Strange and Hellstrom don’t stomp all over Brother Voodoo with their “I know best” attitudes.