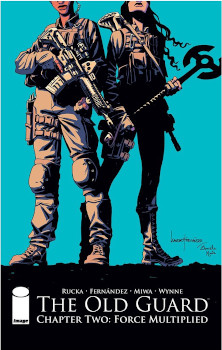 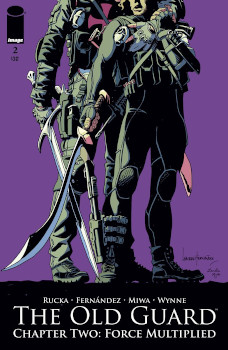 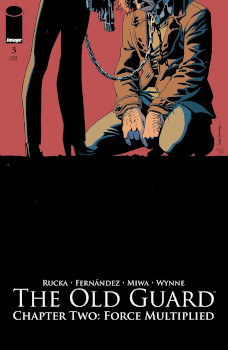 This volume feels more lived-in than the first one. I’m not sure if it’s because we know the characters, and how it was somewhat jarring to meet Andy (and the others) and knowing she’s over 6,000 years old. Nile doesn’t feel like the best entry to this world as the outsider when the flashback to Andy’s girlhood warrior mode felt more impactful. This volume seems to be making up for Nile getting the short end on characterization to be the audience’s eyes.

One does wonder if faking their deaths will get Andy and company out of there. I suppose not every goon will know that they’re immortal, only a few select people would.

I want more Nicky and Joe.

Booker’s unsurprisingly in the worst situation of his life. It doesn’t help that eventually, they will run into each other again.

Fernández’s art still isn’t my favorite. I read a bit about how Rucka envisioned this book and how Fernández thought about his art and the humor he tried to inject into it. Perhaps, it’s a mishmash of tone for me. That said, I’m super excited about The Old Guard movie. But I am curious how this tone will level out.

I’m so jazzed to read this book because of the upcoming film, which the trailer looks fabulous. Of course, this book has been delayed in single-issue release due to the cascading failure that is Diamond and single-issue comic book distribution. (My local shop told me that they had two weeks of comics for me, but also that all their boxes had damage, and so did most of the issues. Will I be able to read new comics?)

It’s funny because my review for issue #1, I talk about the changing of the focus of this book compared to Vol 1, and that’s precisely what Rucka addresses in his backmatter. I prefer this look into Andy’s story, and also how we’re getting more to Nile than a blank canvas to serve as a stand-in for the reader.

Nile’s certainly flirting with danger with the FBI agent, and I liked how the rest were spying on her. I highly approve of Mustafa’s Basil Hayden choice in whiskey.

Andy has a connection to this woman. I wonder if she was in issue #1 in that fight scene with young Andy. Or if she just became immortal before Booker did. I also want to know more about how she sees herself as different.

Drowning thousands of times sounds horrid. As much as I don’t like Booker, I don’t wish that on him.

It’s incredible how a tweak in the storytelling can change how much energy I find here and how much more invested I am.

How is this going to be only five issues long? I think I hear Rucka cackling somewhere.

Now we know about Andy and Noriko. The two lovers who spent 2,000+ years together before Noriko went overboard on a boat during a storm, and they weren’t able to find her. She died over and over under those waters. This repeated death also explains why she chose that particular punishment for Booker.

In a way, a jilted lover — who wasn’t really jilted because Andy, Joe, and Nicky did try to find Noriko — seems a little less menacing than someone who might capture them, torture them, or sell them to the highest bidders. Or just out them to the world.

Noriko said she spent hundreds of years climbing out of the sea. But, besides serving the story, I’d like to see what motivated her to step forward and reconnect with the old gang. Noriko had to figure that some of them were still alive. Not to mention, she’d have gotten the dreams about new people like Booker and Nile.

I’ve had some mixed feelings about Fernández’s art. However, here, the choreography of the fight scene between Noriko and Andy was brilliant. I can see this being filmed.

James is back noseying around. I saw a bit of Fernández’s humor as James and Mustafa survey the scene and realize different things about the missing bodies. And also, whatever Nile will tell Mustafa.