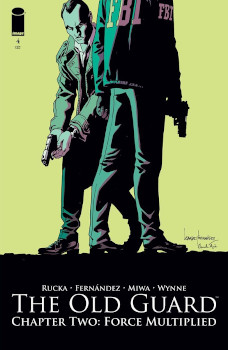 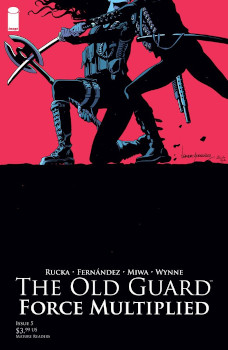 When flipping back through this issue, I’m surprised at how much text and exposition is on the page. Which is needed when we get so few issues to set up such a lush world and this search to find the meeting of being immortal.

Though I do think it’s leaning toward what Angel said in the TV show Angel — “If nothing we do matters, then all that matters is what we do. ‘Cause that’s all there is: what we do.”

Even if James’ research into the people that Andy, Nicky, Joe, and Booker have been saving all these years shows some kind of purpose to their actions, or that they’re fulfilling some kind of cosmic need. Nicky and Joe’s good cops play was particularly cute, and it speaks to Andy’s exposition about their connection and love.

You can tell how much Andy loved Noriko because she lets her guard down too much. Even when Noriko gives her cackling villain speech, while jumping on top of a park bench for a great visual gag, Andy still wants her to be redeemable. And what do you do with an immortal who seemingly won’t die.

I am curious to learn what happened to Lykon, and if he was lying about not seeing Noriko.

Though Noriko is predictable, and hopefully, the gang will be able to quickly find Andy at the bottom of the sea. I do hope Niles finds her, or something about this moves Niles’ emotional journey forward. I’m not surprised she showed Moose she could die, slept with him, and then left the next morning when he was still asleep.

This issue: she is thick. Like maybe Image just should’ve given the series another issue to keep with the flow. Though I do think longer issues fit more with Rucka’s writing style as we’ve seen on his recent Lazarus issues.

I was a little sad that this issue didn’t make it into my hands before the movie came out. The Old Guard movie on Netflix 5/5 stars from me. Go watch it, if you haven’t already. Of course, you are reading this comic book review, so you probably have.

After the movie came out, a few friends — who knew I’d read the comics — were asking about the universe rules about how dead they can get and still come back. Beheading? Burnt to ashes? In the film and here, we know that Andy and Noriko/Quynh are burnt as witches, but neither tells us how far and how much they were burnt.

In this issue, however, we see Andy regrow her hands, after both are cut off below her elbows. We also see Andy shot in a way that a lot of her body is blown to bits by multiple, rapid fire machine guns at close range. This maybe doesn’t answer all the questions, but it gets us further. And frankly, I’m not sure I’m that worried.

The problem with Andy is that she is old. That she’s lived in times where human rights were not a thing, and they could perhaps not be a thing. Andy wasn’t wrong when she said if she hadn’t enslaved the men from the warring village, they would’ve killed and raped her people. This doesn’t make her right, and no matter the good deeds she and the team have done together, she may never make up that dark moral stain. Beyond anything else, it does make her out-of-time.

This ethical problem asks questions about who should be leading. By the end, Nile is the one leading. She’s the youngest, but also the one with the most moral authority. Perhaps, this is how it should be. Not that all young people have great morales, but in general, their values will be with the times. Perhaps, the reason for Nile is to provide this reason for being and the ability to assimilate into the world. They keep away from mortals because of the pain — but perhaps they are missing something vital about being around young people.

Additionally, it was incredibly smart writing from Rucka to not only use the character, who served as the reader insert in volume one, but also a Black American woman to dig into this. Her ancestors were enslaved peoples, and she and her family have suffered the systemic oppression arising from this.

While I was sadden to see Andy not join the team at the end, it made sense. It also makes sense that the immortals would be gathering and that there would be more. Andy has more in common with Noriko than Nile and Booker, and maybe even Joe and Nicky.

As much as I have loved volume two more than volume one, I still find myself tripping on the comedy of Fernández’s art. Because this oversized issue allowed us to spend more time with the characters, there was more room for bodies in space, which is how Fernández expresses character emotion, but at some points, I wanted close ups on tears and anguish on faces.

I cannot wait for volume three, and I have incredibly high expectations here.