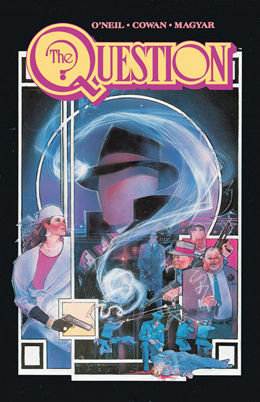 With the exception of Cowan’s art very ’80s comic book, The Question: Zen and Violence really stands the test of time quite well. Sure some hairstyles and outfits are outdated, but the book itself feels fresh. This feels like the type of story that modern comic book editors would eat up with a spoon.

Having only encountered Vic Sage later in his life, I was kind of surprised to find that he was not always interested in being a zen guy with a mission. He was once an ace investigative reporter (which we all know I have a soft spot for, see Murphy Brown and Lois Lane) and had a hot temper. I rather loved his origin story in that he tried to be the Question before he died; that humans get hurt and die, but Lady Shiva found something else in him. That Tot was his only friend both before and after, and that in his early days, Batman tried to scare him away from being a superhero.

The corruption running through Hub City reminded me a lot of Preacher minus the crazy supernatural religious aspect of that title. I feel Preacher owes a lot to The Question. I do think that O’Neil does a wonderful job at bringing Hub City to life through it’s citizens and atmosphere. No one feels quite safe or at ease. There are riots and other criminal acts going on all the time. But at the same time, there’s children going to school and people working. I enjoyed the Maud Frawleys of this story.

I loved Lady Shiva here and her spectacular blue ’80s hair. Her work with Vic seemed very true and fitting with her other stories. I like that O’Neil makes her a woman of honor and someone with a code. I like that she both kills and reforms the Question. I adored that when Vic reappeared, Tot yelled at him just as much as Tot yells at Renee in the newer comics.

Hatch and his plans to blow up a school bus full of children seemed a little cliche. Seemed almost too maniacal and over the top. Perhaps I just prefer my evil to be more subtle. Of course, when he wants to sacrifice Jackie later, his obsession with killing the innocent seems to fit better.

I wasn’t too fond of Myra. I wanted her to have a bigger role. I wanted Vic to save her more than he did. I do, however, like that O’Neil had her ultimately save her daughter by killing Hatch, and even though he was a very evil man, she still feels guilt about taking a life.

The two things I really didn’t like about this book were Francine Tolchuk’s extremely pointless rape and how Junior Musto doesn’t work past his father, but instead makes himself a disfigured villain. I had more hope for Junior, especially if he is an actual gay character, and it feels too obvious to me that the Question, the man with no face, would have an arch-nemesis with no face. Plus, editors collecting trades, starting a new story arc in the last issue of a trade doesn’t make any sense. Just saying.

Overall, I’ll be picking up the next trade of The Question.

Buy The Question Vol. 1: Zen and Violence by Dennis O’Neil and Denys Cowan