Spoilers for The Mighty Avengers #20 by Brian Michael Bendis, Echo #8 by Terry Moore, and The Authority #5 by Dan Abnett and Andy Lanning 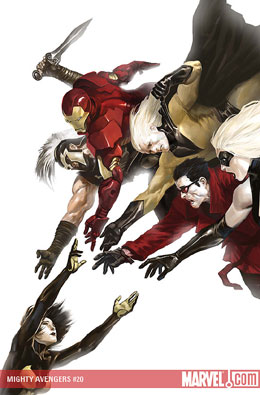 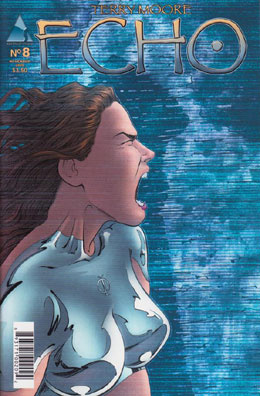 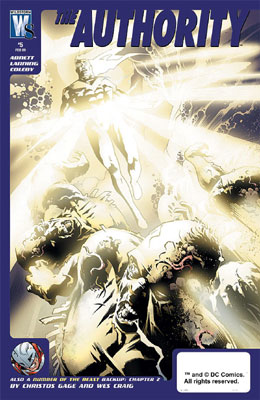 This is the story I’ve been waiting for since the Skrull Invasion. While I don’t like Hank Pym, I do think that this story shows him in a sympathetic and tragic light. This epilogue reminds me of the reasons why I like Bendis as he’s a good with character pieces and stories that are character-driven. (Secret Invasion was not, while House of M was.)

The story starts out with a wonderful retrospective on an innocent time in the Avengers’ history. Specifically when they found Captain America in the ice. This is how Hank pictures Janet.

Hank knows Janet is dead, but he doesn’t have the whole history — Wanda’s wish for no more mutants, the registration act passing, Civil War, Captain America’s death, and Hank’s face being the face of the Skrulls. It’s harrowing to see him go from optimistic Avenger to a broken one.

I love seeing Bendis use Carol and Simon as Hank’s support. One of the best scenes was when Carol asks Hank if he’s okay and he responds in the following manner:

The art here is really great to show his sadness.

Hank’s outburst at Janet’s funeral is a little overwrought. So is Thor’s response. However, it’s not unexpected. Plus, funerals are always over-the-top with guilt and grief.

While I do think it’s ridiculous that Bendis killed off Janet (among dead female Avenger killed by Bendis), in many ways, Janet is the most innocent of all of them. She’s never been evil and always been good. Janet was a battered wife, who got away from her abuser (kind of due to different writers), and one of the only Avengers to have a successful career outside of superheroing. It is, of course, something of a red herring that Janet has no body to bury.

This comic is about Julie learning how to get her life together. And also how to use her new superpowers. Julie has been scared. She has been on the run. She doesn’t know who to trust. She knows she’s very powerful. However, now Julie’s learned that she wasn’t the only one effected by what happened at Moon Lake. She’s not the only one with those powers. And while she’s a good person, not everyone else is.

This is the issue where Angie doesn’t die. Not that I thought Angie was going to die of a boring disease. (And not that most writers want to kill of Warren Ellis-created characters.) I’m mean, the super interesting Warhol-disease that I can’t wait for the final reveal of who created it and how they’re going to stop it.

The theme every comic seems to be is to put one of the Authority’s life in danger and then save them. Swift and Midnighter have had their run-ins. Now Angie has. The cliffhanger is whether or not Apollo will die from the Warhol-disease. (My bet is not given that it’s killed by sunlight, and Apollo is currently in the middle of the sun.) That leaves Jack.

Plus, the Doctor if they ever find him again. Of course, I imagine that’s what Swift might’ve found.