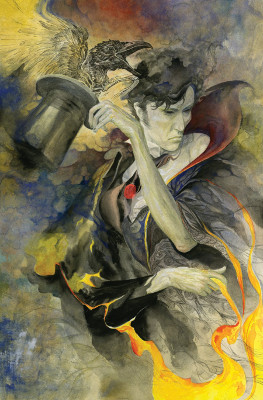 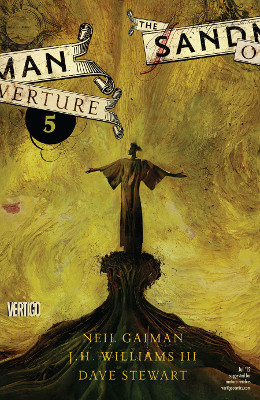 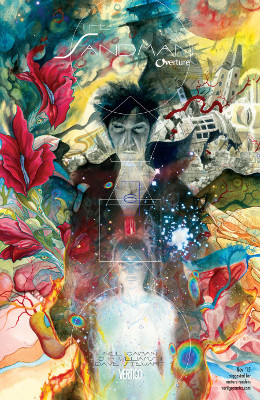 This remains perhaps the most beautiful comic book being produced right now. As much as it’s annoying that the book’s so late, for the art, it’s worth it. (Though I’ve read that Gaiman is a slow writer. Perhaps Vertigo should’ve made at least half of the books be turned in for this run before they started publishing it.)

The stars are a bit needlessly obtuse. I’m not a big fan of diety talk.

Interesting that the Endless have a father, who they can go talk to. Of course, Dream doesn’t have a great relationship with his. Seems par for the course with his character.

I’m sad that the cat aspect of Dream and Hope will be left behind for the stars’ city. And the crazy star — which was Dream’s fault completely. Which also explains why he’s been insistent on going alone at this.

Night may be my favorite major Sandman god yet. She’s pretty rad and fickle. I love how she cuts down Morpheus, while also wanting him to stay with her. They do compliment each other with their powers.

Night calling out him for his belief and dream that his parents can get back together — and heal this rift in the universe — was priceless. It is really the dream of many children whose parents break up. (I’m glad mine aren’t together anymore, for the record.)

Williams’ art in this section is some of my very favorite that he’s done for this book. (I’d only wish for the cat aspect to be in them.) The dark colors are incredibly and so vivid with Stewart’s additional color work. The purples!

Of course it would be a cat aspect to sneak up on Destiny. So Destiny to say that he didn’t mean to help Dream out of the black hole and would’ve left him there, but there was his annoying ship that wasn’t in the book.

Poor Hope. But now there is a ship full of Hopes.

While I have no doubt Gaiman will wrap this storyline up in one more issue, I’m not quite seeing it. (Though I don’t see how it could outdo the original Sandman series ending, which was one of the greatest endings ever. But this is only the start of the book after all.)

Dreams do indeed create reality here. Or recreate it as it was. In all the imagined ways from the different versions of Hope. Dream guides them and rebuilds with a force that almost causes him his own death. Which we then find out is the reason he was weak enough to be trapped by Roderick Burgess and his seemingly weak magics. (Or at least weaker than Dream at his normal power levels.)

Williams’ art will likely live on as the most beautiful of the Sandman series. The other art was more intense, more harsh, like Morpheus himself, and also remnants of the book being so ’90s.

Loved Delirium always as Morpheus’ favorite sibling or at least the one he worried about the most. Her calling out that the Cat isn’t an aspect of him and how did he not see that earlier was brilliant. Same with the revel that it was Desire working to also save the universe. It was a nice callout to Morpheus not being as alone in his quest as he thought and his siblings not being as uncaring as he assumed. To the latter, we also see Death weeping at the destruction of the universe.

Though Morpheus’ siblings don’t save him from being captured by Roderick.

And so ends (begins) The Sandman.