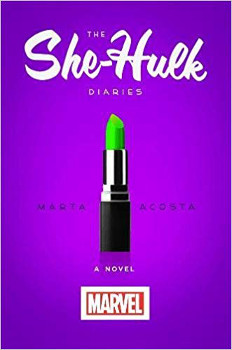 The She-Hulk Diaries by Marta Acosta
Rating: 2/5 stars
#52Challenge prompt: a book with a green spine

I really didn’t know where to put this review. It’s a prose novel about a Marvel superhero, who has otherwise only appeared in comic books. So here we go…

The She-Hulk Diaries came out in 2013, amidst one of those “women read comic books too!” attempts both Marvel and DC have tried multiple times. They’ve only recently succeeded in having any traction with this — and by “they,” I mean DC. They’ve smartly hired already famous YA authors with built-in audiences like Leigh Bardugo, Marie Lu, and Sarah J. Mass.

The She-Hulk Diaries is dressed “for ladies” only. She-Hulk, our star character, is green skinned and wears purple. The book’s spine is lime green, the front cover purple with white curly and diary fonts, and features a single tube of rolled out green lipstick and the Marvel logo at the bottom. Someone gave Acosta the direction of Bridget Jones’ Diary with a superhero, which is exactly what this book is in plot and writing style.

For my own background, I have read every single She-Hulk comic book published to-date, read the first two Bridget Jones books, watched all three movies, read Jane Austen’s Pride and Prejudice, and watched a couple adaptations of it. While not without flaws, all of those things are better than this book. The She-Hulk Diaries are as hollow as the name makes it sound. It has none of the charm, none of the tension or politics, no endearing or even drive-you-mad characters, and none of the sexiness. Read those books and comics and watch those movies before this.

Like the first Bridget Jones, The She-Hulk Diaries starts off on New Year’s and with resolutions from Jen Walters, aka She-Hulk, about changing her life. Like the other book, it’s written in first person and in diary-like entries. Jen kicks off the New Year without a job, without a man or prospect of love in her life, without a home after being evicted from the Avengers’ Mansion, with a best friend who doesn’t know she’s a superhero, and with being pissed off at her alter-ego She-Hulk for her reckless super-heroics, partying, and wardrobe choices. Hulk powers manifest as the inner desires of a person, so mousey, introverted smart lawyer Jen becomes still brainy, but tall, gorgeous, strong, and gregarious She-Hulk.

Acosta isn’t the first She-Hulk author to say that She-Hulk cannot hold down a job as a lawyer while being a superhero and a party gal. Nor the first one to have the character be human, just Jen, when doing her lawyerly work. Dan Slott, Peter David, and Mariko Tamaki all gave us similar storylines in the comic books. However, what surprised me right off the bat was Acosta separates the personalities of Jen and She-Hulk, unlike any author beyond Tamaki. (Tamaki’s recent run of She-Hulk explored Jen’s Hulk form changing and splitting due to the trauma of the death of her cousin Bruce Banner, aka the Hulk.) Here Jen and She-Hulk act more like sisters who inhabit the same body, live in the same space, drive each other crazy, but just happen to never see one another through the day. I’m kind of surprised Marvel okayed this.

The other major difference is that She-Hulk can normally break the fourth wall. (She did this before Deadpool, thank you very much.) I’m surprised Acosta didn’t use the fourth wall breaking technique to have Jen write the diary as a message to readers, especially since this would’ve given the book a different flavor compared to those texts it tries to imitate.

Both the plot and the characters in The She-Hulk Diaries fall flat. Jen sets herself the goal of having a date for Valentine’s Day, and on the first day of her new job, she runs into an ex-boyfriend/fling Ellis, who’s a scientist. He also happens to be the son of the senior law firm partner and husband to Amber, one of the main lawyers Jen’s working with. Amber is ice cold lawyer bitch, and Acosta sets us up to hate her even before we find out she’s Ellis (Mr. Darcy’s) wife.

Predictably, Jen’s first and only case sets her up against Ellis’ best friend Max, and she’s immediately suspicious of him. The story attempts to make Ellis interesting by having him be a mildly famous former musician, who wrote a ton of sexy love songs about a woman named “Gin” who broke his heart after a weekend fling. Everyone immediately figures out Gin = Jen from Amber to Ellis’ dad to Delilah, Jen’s two dimensional best friend who’s just there to make Jen look less alone. At least, Mr. Darcy wasn’t married.

What’s also odd about this book is the lack of other superheroes. Tony Stark gets mentioned a lot, and he’s kind of played as the Daniel Clevear (Hugh Grant’s character in Bridget Jones). But instead of trying to date him, or even having a big panties sex scene, Jen’s really great at not snooping on her exes on Facebook, or sending late night sexts. Tony makes zero appearances.

Besides She-Hulk, Jen mostly interacts with a personal secretary at the Avenger’s Mansion, who is assigned to collected and check She-Hulk’s fan mail.

Jen eventually starts dating her client Sven — let’s not even get into ethical violations — who’s handsome, but boring. She goes on and on about he’s perfect (hot, rich, smart, etc.), but dull. They just don’t have any Gin sparks.

Spoiler, turns out that Sven is actually Victor Von Doom! And surprise, he’s the evil one behind the mess that’s killing kids (what the lawsuit was about) and Amber’s in love with him. The ending fight scene is very public, and pretty sure everyone finds out Jen is She-Hulk, if they didn’t already know. (Which is another weird thing as in the comic books, everyone knows Jen is She-Hulk.)

We’re all unsurprised that Ellis and Jen hook up at the end. Doom is evil, and Amber is out of the picture. Jen may not have an apartment and maybe doesn’t have a job anymore, but she has a man and it’s only May!

Unless you’re a She-Hulk diehard like myself, I’d recommend skipping over this, and instead rewatching Bridget Jones’ Diary or cracking open a She-Hulk comic book.