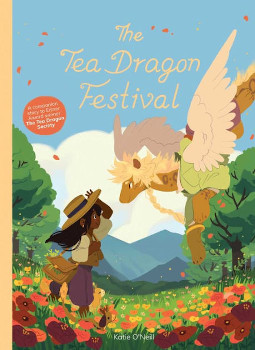 This book is a prequel to the lovely Tea Dragon Society, and I almost didn’t realize where it fit in the series until the very end of the book. Obviously, these two stories were connected. But it had been a second since I read the first one.

Rinn is a delightful character, who’s the village forager, but she doesn’t feel her skills are quite useful. Thus, she’s always trying to do other jobs, like perhaps becoming a cook. For her, this is a journey of self-discovery and seeing how she — and everyone else in the village — work together to create a harmonious society.

This society is made more harmonious by Rinn’s accidental stumbling upon and awaking Aedhan, a real dragon. There are tea dragons, which feature less in this book than the previous one, and there are big dragons, who can morph into humans and also retain their intelligence and communication skills no matter what form they take. Aedhan was asleep for 80 years. He was sent to guard the village but failed to show up when another creature put him in a long sleep.

I did expect this story to have more conflict. When Hesekiel and Erik show up — young adventurers, who their older selves (and the tea dragons) are our connection to the first book — it seems as though there may be a hunt. There’s even a moment when Aedhan protects the village from a massive eagle-like creature. However, Hesekiel and Erik instead find a creature of magic and let it know not to put people to sleep for 80 years, which seems anti-climatic.

This book is more about the slow-burn relationship of Rinn and Aedhan, both finding their places in the community. There’s lots of gorgeous art from O’Neill. Plus, a great addition of a deaf character and use of sign language in the book.

Overall, this was another lovely addition to the Tea Dragon world. The ending Tea Festival showed the heart of this world and the importance of caring for others.