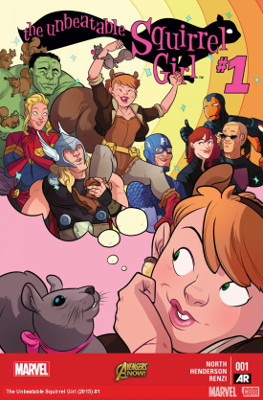 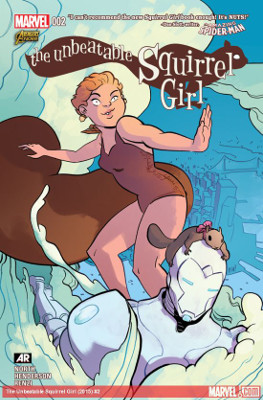 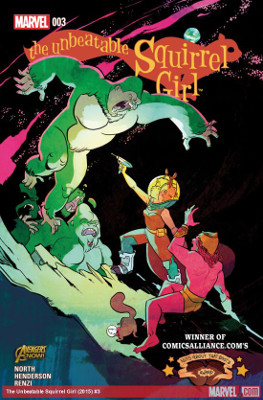 As predicted, this book is super adorable. I also love that Marvel’s giving another younger woman who own title. This will definitely be great for creating new readers. Also putting North and Henderson on the title was brilliant, to tap into both their audiences, who probably don’t read Marvel comics generally.

I like that Doreen’s been hiding in the attic of the Avenger’s mansion and then going out to fight crime. And, of course, North took Spider-Man’s song and changed it to be about Squirrel Girl, which is great foreshadowing for her taking on Kraven in this book.

Her roommate Nancy Whitehead seems very typical college freshman, especially in that she’s brought her cat Mew. When I was in college, I also had a cat I wasn’t supposed to have and referred to him as my “fish.”

Tomas is totally going to point out to Doreen that she’s a very obvious superhero.

I liked that Doreen gave Kraven a new purpose. Seriously, being unkillable means he can explore some cool parts of the Earth. But she might just need him there to help fight off Galactus.

Okay, this issue got even better than the first one. I wasn’t sold on Galactus being the major looming villain for the first arc, but I’m feeling it more. Or there’s just more of a plan coming together, even if it feels a tad impossible. I’m still kind of betting then even if Squirrel Girl gets herself up to the moon and starts fighting Galactus that the Avengers, Fantastic Four, or the Guardians just might show up. Someone else might at least notice Squirrel Girl and be like “what’s going on?”

I really loved the Iron Man suit with the tail special for Squirrel Girl. Tippy-Toe’s combination of head and glove was pretty funny too.

I also adored North’s defending of the selfie. Heck yes, if you defeated Galactus, you’d totally be taking a selfie over that one.

Doreen’s eagerness to make a new friend and keep it in Nancy is very cute and rings incredibly true to that first year freshman dorm situation. Same with her overwhelming crush on Tomas. Plus, all the clubs. Yes, even small schools have clubs for everything and anything.

The more I see with Nancy, the radder that I think Doreen’s roommate is. Somehow I see Nancy someday putting on her own costume and helping out Squirrel Girl. Maybe with a cat costume.

Whiplash continues to be a highly ridiculous villain. Even in a book full of fun and silliness, Whiplash seems extra ridiculous. I do love Doreen using science and her powers to communicate with squirrels in order to take down Whiplash. Seems like the best way that Iron Man should’ve used a zillion years ago.

The suit of squirrels was also brilliant. And weird as hell. Which clearly fits for this book perfectly.

Can’t wait to see what finally happens now that they made it to the moon in order to take Galactus out.