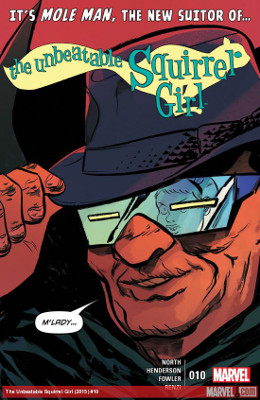 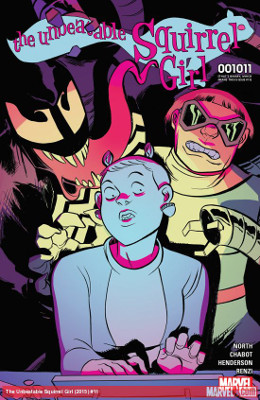 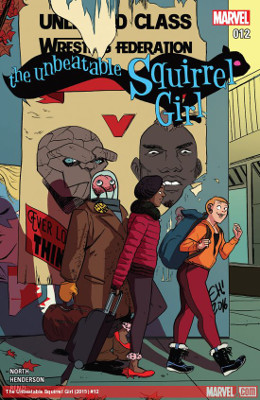 I kind of love that this is the first time Squirrel Girl’s ever lost a fight. And that she did it on purpose. “Man, losing fights is the worst! I can totally see why I don’t do it ever.”

Mole Man and Tricephalous’ romance is so gross. So gross.

Nancy taking charge was pretty good. I don’t know why she or Doreen ever thought it would actually work. Good thing Tippy-Toe was there for backup when needed.

There was a lot of great meta dialog about how men think they are entitled to women and to romance. I did like how Tricephalous’ crush on Mole Man flipped the “who’s never notice whom?” situation on its head.

Doreen uses her STEM knowledge to save the universe and herself. Even if it’s all just a nightmare from Nightmare. Knowing that she’s dreaming is exactly how she actually won. She didn’t really need to outsmart Venom’s powers with squirrel cries. Or Count Nefaria with teaching him how to count to 31 on his hands in binary! (Thanks, North, for teaching all of us binary.)

What she really did was take control of her dreamscape. Nightmare’s inputs didn’t work because she realized it all herself.

I did love all the squirrels getting super pissed at her for their world without nuts. (Even though squirrels do eat a lot of other things besides nuts.)

And in true Squirrel Girl form, she teaches Nightmare how to fly joyous in the dream world.

The wilds of Canada! I wondered just how long North would take to transport Doreen and company to his homeland.

While I don’t question the logic of using a transporter instead of longer methods of travel, plus border time, since they couldn’t bring the transporter with them during transport, how are they going to get back over the border? This could get really too real too soon. (Of course, I’m reading this post-Trump’s ban, and this was published in November 2016.)

Doreen being bored out of her mind was best. Her without technology and suddenly having a case to solve — the missing muffin! — was a little Nancy Drew. Especially with the cabin in the woods. Reminded me of those stories I read when I was a girl. Of course, Nancy didn’t the powers of a squirrel, only those of a girl.

Speaking of human Nancys, continue to adore Nancy. She’s very happy to unplug for a while and read about plant life.

Brain Drain not being able to distinguish humans was hilarious and a great achilles heel for the guy. Though I do agree that there are plenty of superheroes in NYC for Doreen to be able to take a vacation.

Of course those guys are lilliputian and make Doreen their Gulliver. (Though the Lilliputians did make friends with Gulliver eventually.)