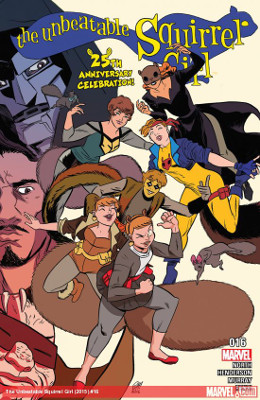 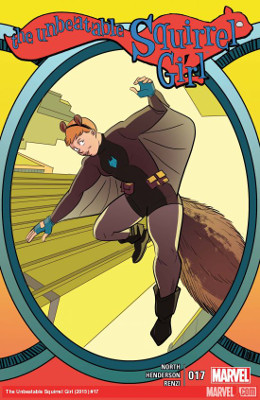 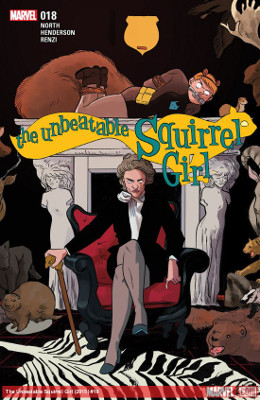 The Unbeatable Squirrel Girl #16 by Ryan North and Will Murray
Art: Erica Henderson and Steve Ditko

I love that Squirrel Girl’s origin story starts out with her parents meeting. You know it’s going to be good to see just how our little Squirrel Girl was made.

It’s really quite Canadian polite of them that they never mentioned anything about Doreen’s tail to the doctor when she was born. Though I do want to know how she ever went for checkups as a kid if her parents had her hide her tail. Or how when she came out the doctor and nurses didn’t notice.

It was cute to see little Doreen finding out that she can speak squirrel. And Monkey Joe having quite the shock himself. (Though I do agree with the criticisms of this issue that North is a far more engaging writer than Murray.)

I just have so many questions of what happened to Monkey Joe. Maybe he’s in a squirrel retirement community?

Of course, Squirrel Girl makes friends with the Hulk. Kind of. This is what she does. Even if she also makes him perplexed.

No one invited the Red Skull to this birthday party. I’m glad to see there’s at least one hero character in the Marvel universe who is still kicking Nazi butt! I hope this scene essentially is a subtweet at Spencer. (If you are confused about this sentence, feel lucky that you’ve avoided knowing about comics drama and shitty people in comic books who continue to have their voices amplified through Marvel’s biggest heroes and marketed plotlines.)

Yes, Loki’s box has a Cat Thor on the side of it!

I get superhero comic books need villains, but because there are so few women in computer science, it seems a shame that North’s making Melissa Morbeck evil. I mean, Doreen usually solves her problems with friendship. Still. Sigh.

Though I don’t blame North for pointing out how rich tech giants in real life seem to be kind of evil. Or just out for themselves instead the greater good. Not to mention, we then give them leverage and praise for being extraordinarily rich.

HOW CAN YOU EAT ANIMALS WHEN YOU CAN TALK TO THEM?

I have obvious strong feelings about this. This is why Wonder Woman is a vegetarian. This is why Aquaman can’t eat things from the sea. This is why Doreen lectured Ant-Man on his brainwashing of ants. This is why Arial needs to dump Eric because he’s going to put Flounder and Sebastian on her plate one of these days.

Even if Alfredo and Chef Bear in a knife fight is kind of fun and on brand for this comic’s level of wackiness…I don’t like when animals get hurt, you all.

Doreen is going to be horrified when she learns the truth about her mentor. And when she has to accept the possibility that she may never learn to speak chicken. Though you’d think she’d have Chipmunk Hunk teach her how to speak chipmunk. Also has Koi Boi and Chipmunk Hunk not attracted the attention of Melissa? I suppose Squirrel Girl is unbeatable.

Nancy’s rant about ethics in technology is spot on. I love how they are all concerned about their friend Mary and “Brian” continues to be a-moral.

While I still don’t understand how you can eat animals that you can talk to, I guess since Melissa doesn’t have a nature ability to talk to the animals, it’s more understandable.

I have to say that I’m kind of disappointed by this turn of events. Melissa’s evil nature became known in a much too obvious manner when she doesn’t want to meet Nancy or Koi Boi. When her bear guards get all aggressive. Like the whole thing is very evildoer.

Also, disappointed that Doreen wouldn’t realize that her new suit could be controlled by Melissa.

Are there more rats than pigeons in NYC?

I’m not really sure what Melissa’s end goal is. It seems like a woman so smart would have an end goal.

Alfredo and Chef are still alive and fighting. This is good.