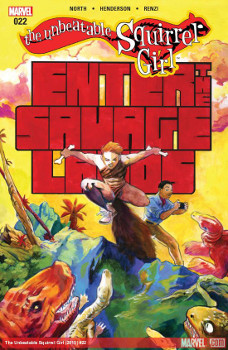 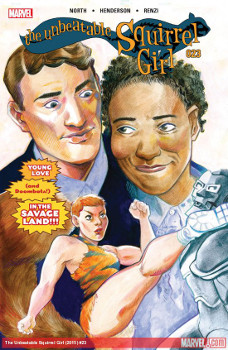 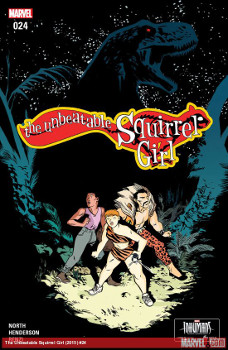 This issue was hilarious. It was about dinosaurs. There was snappy comedy. There was great friendship. There was ridiculous Tippy-Toe as a scarf. (Seriously, who’d buy that?) There is promise of Kraven the Hunter. This is The Unbeatable Squirrel Girl in her top form, and whatever made this brilliance come alive, please more from North and Henderson.

Dinosaur heaven! OMG, they get to ride the dinosaurs! This book makes me excessively happy. I’m going to have to disagree with Nancy here. One does indeed need to ride every dinosaur. Henderson’s great art makes these scenes look even more fun.

And of course, there was a reason behind all those science tests that Nancy and Doreen had to take in order to even enter the contest. They must save the Savage Land from extinction.

I now just want comics where Doreen and Nancy travel to different theme parks / areas of the world and explore. Though they need to take Mew too.

I’m real skeptical of Nancy’s attraction of Stefan, the Latverian computer scientist. Of course, anyone under Doom’s rule sounds ridiculous. The goodbye “acronym” was hilarious. But it did get a little much.

All that I’m saying is nobody is good enough for Nancy.

I cannot image how long North has been waiting to take Doreen to the Savage Land. The bathroom story was so silly, but true to Doreen’s character. Hopefully squirrel powers help with bladder control. Am worried about Doreen’s ability to get medicine for a UTI in the Savage Land. (Yes, there are just some things that get to me.)

I cracked up a lot about the assessment that watching software engineering is incredibly boring. Used to work with a ton of software developers, and their mode of working is not interesting at all. Mine’s not that much better, but I like to think I have more variety.

But hey, maybe the Doombot will be able to beat dinosaur Ultron. I suppose Ultron is one of the few giant powers who Doreen hasn’t kicked its butt yet.

I kind of wished that I liked Ultron more. In general, I find him boring. Even in dinosaur form, he’s still boring. Superheroes and villains with flaws are better.

(Yes, I know this title is *unbeatable*, and it’s fine if Doreen is unbeatable as she still has flaws. And she ends most of her fights with friendship, not brawn!)

I have very mixed feelings about Doreen’s Savage Land bikini costume. Just to be clear, Henderson never sexualizes her in it, and all Doreen’s movements remain her normal ones. But it seems a little much, and perhaps a little smaller than I’d expect. It’s very Pebbles Flintstones. And I’m kind of shocked that none of the characters have commented on it.

Oh, Antonio, we barely knew you.

Seems like there are just a few problems, and maybe a mass extinction on its way…

Tippy-Toe is right that dinosaurs are way more interesting than computer science and fighting Ultron.