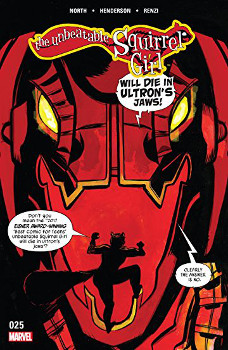 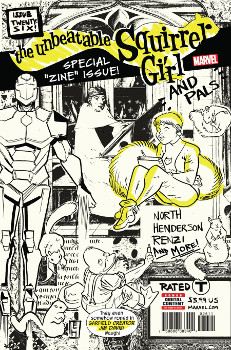 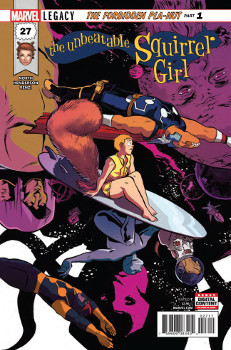 This book actually made me like a comic featuring Ultron. It is a great feat. Not even the combination of James Spader’s voice — always and forever — and Joss Whedon — whose charms fade rapidly as we age — could make me like Ultron in the Avengers movie. Though now I kind of want to reread this issue and pretend to hear Spader reading it to me.

Okay, I loved this because it is what The Unbeatable Squirrel Girl does best. It isn’t all about Doreen being able to kick butt and eat nuts. Though she does that. It isn’t all about her squirrel companions. Tippy-Toe is the only squirrel representative in the Savage Land anyway. It isn’t just that Doreen saves Kraven. But is it that they all work together, and they work with Nancy, Stefan, the other computer programmers, and the dinosaurs to defeat Ultron.

Loved Ultron just covered in a kicking ball of Squirrel Girl and dinosaurs.

I’m very happy that Nancy wisely chose to end things with Stefan. That was just going to go very badly with Doom. There’s already been too much Doom.

I don’t know about Maureen planting Ultron and turning him into an oak tree in her garden. I mean, first, he’s awfully close to the house. You’d think you’d want him as far as possible away from any internet connections. Plus, oak tree roots. Maybe Ultron will be too distracted trying to figure out what happened to the Ent wives.

This was fresh and fun. I did greatly enjoy the meta around superheroes and their destruction of public and private property.

All these characters have such wild different points-of-view that it kept the humor fresh.

The Howard the Duck one is gross though. So gross.

Galactus and the Silver Surfer reinterpreted as Garfield and Jim was pretty cute. Galactus is definitely the character who will eat anything, even when he says that he’s not going to. Sometimes, you just can’t stop the hunger. Or Mondays.

The Spider-Man ones were my least favorite. Maybe I’m just not as amused about Spider-Man meta as other people. I know Spider-Man is a super high-seller, but yeah, as a butt of jokes, I’m not into it.

The Wolverine and Sentinel short was particularly touching. Loved seeing Wolverine heal, in another way than he normally would. Reform and rehabilitation are important storylines.

The Loki tale was great, especially in how the story was circular. The art was particularly fun as well.

I did want this issue to have more Nancy in it.

This issue is a lot. A lot of Squirrel Girl issues are a lot.

But what always shines through is the dedicated friendship between Doreen and Nancy. Of course, if Nancy (and Tippy-Toe) go missing, Doreen will be on the case. Even if she didn’t have superpowers, you know she wouldn’t leave her friends behind.

I guess Galactus ate all those nuts?

I appreciate the running gag that Nancy and Doreen regularly get mysterious tests that lead them on adventures, from this how to defeat Galactus question to when they went to the Savage Land to save the dinosaurs.

The space squirrels being green were a great touch in how to make them different — but still adorable — to we humans. Though these squirrels are sure procrastinators when it comes to solving getting their world eaten.

I’m a bit mixed in how I feel about the Silver Surfer and his surfer bros. It’s a bit literal, which as someone who can be sometimes accused of being too literal, I appreciate, but they did add to the feeling of too much.

Doreen’s hunt for someone who can speak cat was too great. Too bad Wonder Woman is a DC character. Of course, Loki is on the case. He loves cats and admires Nancy! But of course, Loki is also chaos incarnate so instead they find Dormammu.